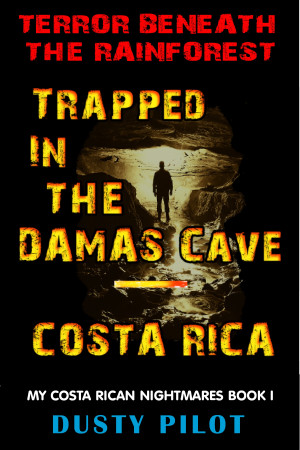 Trapped In The Damas Cave - Costa Rica, Terror Beneath The Rainforest

Dusty Pilot began thinking outside the box at the age of eight. Throughout his life, he continued to color outside the lines, while living in the United States and beyond. His creativity flourished as he authored eight "how-to" creative living books during the 1960s and 70s, and became known as CreativeWise Guy Dusty Pilot through his syndicated television series and newspaper columns.
Dusty's lifestyle is anything but boring. It has led to his becoming an entrepreneur, world-traveler, editor of a weekly magazine for Ohio's largest evening newspaper, designer of his own line of men's clothing, and endless other ventures.
When not writing his memoir, "My Life Outside the Box," due to be published in 2017, Dusty writes short narratives about his intriguing adventures. He also enjoys traveling to exotic places, public speaking, creative gardening (building vertical walls of flowers for tiny spaces and privacy), creative cooking (devising new recipes, especially for hors d'oeuvres), entertaining and serving guests a smorgasbord consisting mainly of his latest recipes, and pampering his pooches, Sadie and Scooter.

About the Series: My Costa Rica Nightmares

You have subscribed to alerts for Dusty Pilot.

You have been added to Dusty Pilot's favorite list.

You can also sign-up to receive email notifications whenever Dusty Pilot releases a new book.