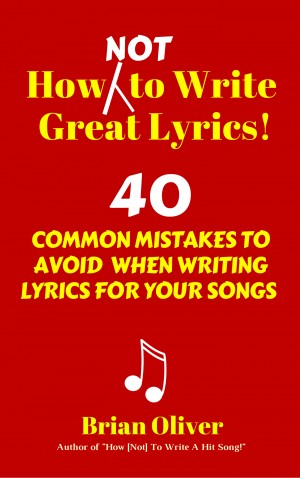 How [Not] To Write Great Lyrics! - 40 Common Mistakes to Avoid When Writing Lyrics For Your Songs

By Brian Oliver
This book looks at the essential lyrical elements found in the structure of all hit songs. It highlights the most common mistakes made when these key components are built into a song, and offers expert advice on how new writers can avoid such errors in their own lyrics. It will help aspiring writers to eradicate weaknesses in their lyrics so they can achieve the success they’re striving for. More
"How [Not] To Write Great Lyrics! – 40 Common Mistakes to Avoid When Writing Lyrics For Your Songs" is the follow-up to Brian Oliver's highly-praised book "How [Not] To Write A Hit Song! - 101 Common Mistakes to Avoid If You Want Songwriting Success".

"How [Not] To Write Great Lyrics!" takes a close look at the essential lyrical elements found in the structure of all hit songs. It highlights and analyses the most common errors made when these key components are built into a song, and offers expert advice on how new writers can try to avoid such mistakes in their own lyrics.

Most writers have, at some stage, had to endure the pain and disappointment of having their songs rejected because music publishers or record companies didn’t think their lyrics were good enough—and many writers have ended up asking themselves: “Could I have done more to make my lyrics better?”

This book aims to help writers recognise any weaknesses in their lyrics, so they can re-work them, make them stronger, and hopefully achieve the breakthrough that they’re striving for.

The music industry has been going through major changes in recent years. As a result, competition is now even more intense. So it’s more important than ever for writers to make sure their lyrics stand out from the crowd by avoiding the traps and pitfalls that many inexperienced writers fall into.

The book also shows new writers how to avoid common failings such as putting the most important phrases in the wrong place in a lyric … and not making sure their lyrics are ‘singable’.

The book also highlights other causes of lyric writing problems—such as having the wrong mental attitude … an unsatisfactory writing environment … not paying enough attention to ‘creative preparation’ … and not taking steps to avoid writer’s block.

The book’s author, Brian Oliver—an experienced music publisher, songwriter and music consultant—warns that aspiring writers’ chances of success could be hampered if they fail to spend enough time polishing their lyrics and eradicating weaknesses.

"How [Not] To Write Great Lyrics!" will help new writers to produce better lyrics, while avoiding fundamental errors at each key stage in the song development process. It includes important tips on fixing and strengthening lyrics, along with a comprehensive checklist of more than 100 potential hazards that writers can measure their own lyrics against—no matter how ‘finished’ they think their songs are.

Brian Oliver is a journalist, musician and songwriter, and also a highly experienced music publisher and music consultant who has been involved in the music industry for over 25 years. As a publisher, he has worked on the songs of legendary writers such as Neil Diamond, Janis Ian, Albert Hammond, Chip Taylor, Gilbert O’Sullivan and John & Johanna Hall; bands like The Stranglers, Spandau Ballet and The Shadows; film & TV composers such as Colin Towns; and highly talented new writers like Joni Fuller. He has also been a consultant to major companies such as Universal Music, Warner Music, BMG and Zomba Music Group.

You have subscribed to alerts for Brian Oliver.

You have been added to Brian Oliver's favorite list.

You can also sign-up to receive email notifications whenever Brian Oliver releases a new book.