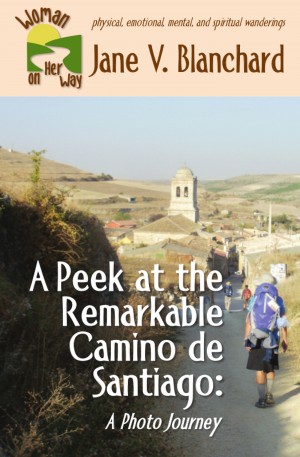 A Peek at the Remarkable Camino de Santiago: A Photo Journey

By Jane V. Blanchard
See how remarkable the Camino de Santiago is with this FREE photo journey. More
This 130+ photo journey illustrates the phenomenal appeal of the Camino de Santiago, a 500-mile pilgrimage across northern Spain. By mixing pictures of the majestic Pyrenees, the high plains of Spain, and the Galician hills with those of architecture, people, and the Spanish culture you get a peek at this remarkable trail and why it has gained the status of a European Cultural Itinerary.
Download: epub mobi (Kindle) pdf more Online Reader
lrf pdb txt
Price: Free! USD
Add to Library
Create Widget
Tags: travel journey best photo camino camino de santiago travel to spain hikes and walks photo journey
About Jane V. Blanchard

Jane V. Blanchard is the author of the award-winning "Woman on Her Way" series. Since retiring in 2011, she has visited sixteen countries by foot and by bicycle and written two books about her wanderings.

Jane was born in Hartford, Connecticut. Upon graduation from college, she worked as a travel guide in Madrid, Spain, and cried at her first bullfight. In 1975, she and her husband Dennis lived in a tent in Winchendon, Massachusetts, for six months (until December) while they built a log cabin. After two years of living off-the-grid, they lived a self-sufficient lifestyle on a five-acre “gentleman's” farm.

Before moving to Sarasota, Florida, she lived in Hampstead, New Hampshire for twenty-four years, where she raised two children, was a soccer and Odyssey of the Mind coach, and received the New Hampshire Excellence in Education Volunteer of the Year Award in 1996. She enjoyed hiking and biking, and climbed twenty of the forty 4,000-foot mountains in New England.
In her fifties, Jane started mountain biking and racing. In 2002, she placed second in the Eastern Fat Tire Association Senior Division. “Even though I was not the fastest competitor, I did attend and complete the majority of that year's races. Just like with the turtle and the hare, slow and consistent wins over fast but sporadic.”

When she married in 1974, her husband Dennis and she joked about creating a lifetime of memories to chat about when sitting in their rockers in old age. Now in her late-60s, Jane is still creating memories, experiencing life as fully as possible, and looking forward to a long future. “I have to live long enough to write about all my adventures,” she says.

In addition to having adventures, Jane enjoys gardening, cooking, reading, and spending time with friends and family.

About the Series: Woman on Her Way

The "Woman on Her Way" books describe Jane V. Blanchard's adventures on ancient European routes or primitive wilderness trails. Join her on physical, emotional, mental, and spiritual wanderings as she explores new horizon. Experience with her the challenges of the unknown.

Also in Series: Woman on Her Way

You have subscribed to alerts for Jane V. Blanchard.

You have been added to Jane V. Blanchard's favorite list.

You can also sign-up to receive email notifications whenever Jane V. Blanchard releases a new book.