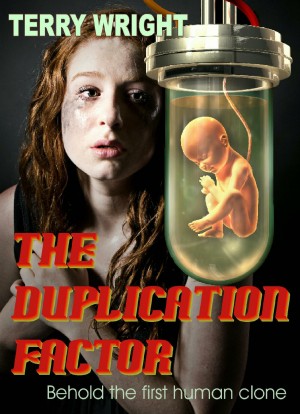 By Terry Wright
Speculation has it, in scientific circles and the press, that in some secret lab somewhere, a human has already been cloned. The truth is there were two clones, a corporate tycoon and a mass murderer. The consequences were horrific. More
Corporate tycoon WILLIAM TULIVER is dying. He needs a bone marrow transplant, but no suitable donor is available. When doctors suggest cloning technology, he hires Blythe Biotech to clone him and recruits his girlfriend to give birth to the clone. He doesn’t know Blythe scientists have developed a special restriction enzyme that not only clones cells, it duplicates humans. The scientists are going to test it on William and the soon-to-be-executed MORRIS BRENNON, a notorious mass murderer.
Available ebook formats: epub mobi pdf rtf lrf pdb txt html
First 10% Sample: epub mobi (Kindle) lrf more Online Reader
pdb
Price: $3.99 USD
Buy Add to Library Give as a Gift
How gifting works
Create Widget
Tags: pregnancy military family cloning science biotech clone human clone laboratory surrogate
About Terry Wright

Reviews of The Duplication Factor by Terry Wright

You have subscribed to Smashwords Alerts new release notifications for Terry Wright.