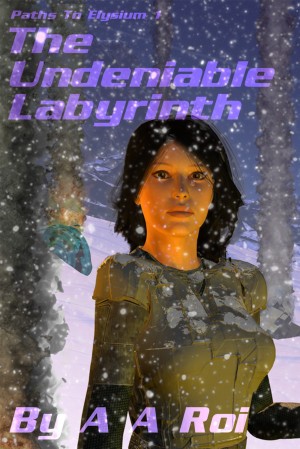 By A. A. Roi
Althea Ram, exile from a culture which survived an intergalactic apocalypse, has been searching for answers amongst the lost worlds of the Consortia. She has planned a desperate transit to Elysium, a world which can provide her everything she needs.But the probability of getting there on the first try is very low. And she has no way of telling how dangerous her destination might be. More
"A fresh story line that gave nothing away."
"It sucked me in and left me wanting more." - recent review on Amazon.com

It has been more than two hundred years since the destruction of galactic civilization by the invasion of the Macros. Althea Ram, exile from a culture which survived the apocalypse, has been searching for answers amongst the lost worlds of the Consortia. Her past failures, pyrrhic victories and dwindling resources have lead her to plan a desperate transit to Elysium, a world which could provide her everything she needs. But the probability of getting there on the first try is very low. And she has no way of telling how dangerous her destination might be.
Because on any lost world, Althea must face dangers; hostile environments, the technologies once beneficial, now warped by Macro control, the decendants of human survivors - turned violent and suspicious by the Macro threat, and even herself, driven by needs she barely controls, or understands.

The Undeniable Labyrinth is the first novel of The Promethead. It can also be read in its entirity at www.thenewscifi.com/thepromethead/01

Born in the United States to Canadian parents, he has developed a somewhat sardonic view of both nations, their relationship with each other, as well as the rest of the world.  He developed in interest in sci-f media and literature, writing and art, from an early age as well as an keen interest in the future (where we all are, after all, going to spend the rest of our lives).  With a desire to learn, but little interest in being taught, he has started and been involved in numerous businesses involving cosmetics, IT, the internet industry, as well as audio-visual tech.
He currently lives in the far south, is engaged in several writing projects in the genres of science fiction, fantasy and horror, and shares his home with a handful of cats.

Learn more about A. A. Roi

You have subscribed to alerts for A. A. Roi.

You have been added to A. A. Roi's favorite list.

You can also sign-up to receive email notifications whenever A. A. Roi releases a new book.