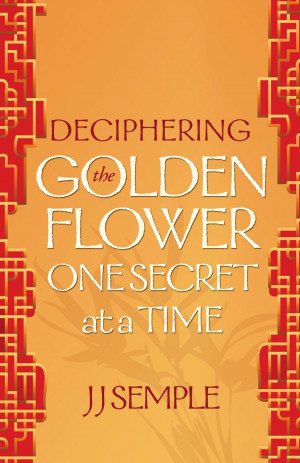 Deciphering the Golden Flower One Secret at a Time

By JJ Semple
After suffering a childhood injury, JJ Semple finds secret meditation techniques that correct the damage done to his body. A companion piece to The Secret of the Golden Flower, this book is also a detective story. Neither Richard Wilhelm, the translator, nor Carl Gustav Jung, the famous psychologist, were able to plumb the depths of these techniques. An intriguing, original memoir. More
Like many seeking spiritual knowledge, I started as a novice, looking for truth that didn’t exist in the material world. Religion hadn't worked for me, neither had higher education, nor specializations such as law, medicine, business.

I wanted to take an active part in my development. I wanted to be the creator of my own Being. As far as career paths, I felt that everyone around me had already figured things out; all they had to do was learn the ropes, keep their mouths shut, and the doors of riches and success were open to them. I wanted something else, something that would allow me to figure out exactly who I was. At the time, I didn’t know much about spirituality. In fact, the first self-realization technique I came across was hypnosis. Almost immediately, I sensed there were other forms of consciousness. I thought this was great! I picked up a few books, listened in on a few conversations about Yoga and meditation. Pretty soon I found myself on the spiritual bandwagon — Yoga magazines and studios, spiritual bookstores, so-called highly evolved friends, etc. I began to investigate the concepts and employ the vocabulary. Initially I was a dabbler, I practiced Hatha Yoga and Kundalini meditation off and on, but something pushed me toward a deeper exploration. I advanced from dabbler to practitioner. A few months into my meditation practice something unexpected happened. I started getting feedback.

My body started changing. Profound psychological and mental changes occurred as well, but the bulk of the transformations occurred in my physical body. Moreover, once the transformations began, my body took over on its own. How does a body take over and effectively transform itself? Very simply, I had aroused a power within myself known as Kundalini, our natural life force, the power that shapes our bodies in the womb. And while I first thought Yoga and meditation were merely means of physical improvement, little did I know that the Golden Flower Meditation I was practicing would lead me to a complete neurobiological overhaul of my being.
Available ebook formats: epub mobi pdf rtf lrf pdb txt html
First 12% Sample: mobi (Kindle) lrf pdb Online Reader
Price: $5.99 USD
Buy Add to Library Give as a Gift
How gifting works
Create Widget
Tags: meditation kundalini cell regeneration nerve revitalization the secret of the golden flower gopi krishna near death experience kundalini energy neuroplasticty kundalini meditation sublimation human potential kundalini awakening
About JJ Semple

JJ Semple has worked as a film editor for NBC with TV producers Stuart Schulberg and Ted Yates, and he edited “Assassin,” an independent feature film, for Rod Bradley's Streetlight Productions.

In the 1970s and 80s he lived in France, where he directed his own training school, Arazon, a company that prepared managers for negotiation and problem solving. After attending a French business school, he established a subsidiary of UNILOG, a leading French software company, in the US. He returned to Paris to work for Apple Computer Europe, designing multimedia programs. He also taught a multimedia course at the American University in Paris. It was during this period that he began writing feature screenplays.

His screenplay, “Everyone Wants to Make Movies” (co-written with Mark Richardson) won the Telluride award in 1997, and their screenplay “Little Dan” won first place at the Telluride Independent Film Festival in 2000.

Semple's formal education includes studying English Literature at the University of Pennsylvania and George Washington University, and a master’s degree in marketing from Hauts Etudes de Commerce in Paris.

His personal education involves yogic practices and spiritual exploration, inspired by a wide variety of teachers, writers and philosophers, including Gopi Krishna, Milarepa, and Lao Tse. However, his worldly accomplishments pale beside his thirty years of investigating workable methods for activating the Kundalini~Life Force. JJ Semple is one of the foremost authorities on the practice and application of Kundalini~Life Force Science.

About the Series: Golden Flower Meditation

The two books in this series are related. You can tell by their covers; they use the same motif. Kissin' cousins? More like blood brothers, in more ways than one: They cover the twin aspects of kundalini: theory and praxis.

"The Secret of the Golden Flower: A Kundalini Meditation Method" is that sequel, a much anticipated companion guide to the SGF as well as a follow-up to his autobiographical kundalini memoir.

You have subscribed to alerts for JJ Semple.

You have been added to JJ Semple's favorite list.

You can also sign-up to receive email notifications whenever JJ Semple releases a new book.