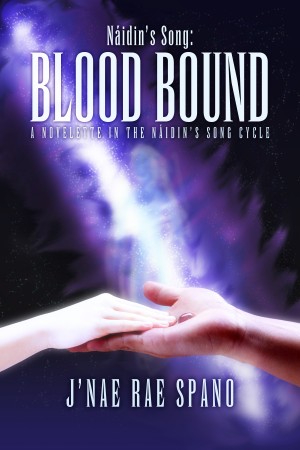 By J'nae Rae Spano
Rated 3.00/5 based on 1 review
Náidin, a young dwarven Bard, finds himself the target of an assassination plot. He must make it home before the assassin finds him. He is accompanied by Ariena, an elf from the Star Paths, who was there at the beginning of his world and the creation of his people. Together they find their destiny.

J'nae Rae Spano is originally from Portland, Oregon. She lives with her husband, Chris, and their cat, Narsil, in Lemon Grove, California. She has a passion for the arts in most of its forms and is active in Science Fiction Fandom. She is currently the Programming Officer for ConDor, San Diego's longest running SF/F convention.

About the Series: Náidin's Song Cycle

A planed collection of Novelettes detailing the life and adventures of Náidin.

Naidin and his twin brother are supposed to be on a supervised journey, making ready for their adulthood. However, a flooded river put paid to that plan, and they found themselves in a human enclave, unescorted and with members of their own people trying to have them exiled – the permanent way. When Naidin’s brother is assassinated, and a pure-blood elf comes into town who he finds entirely too drawn to, Naidin decides to make a break for his people’s settlement, regardless of the risks.

J’nae Rae Spano’s Naidin’s Song: Blood Bound is a fast-paced young adult fantasy novella, offering elements of a rich background story and a well-developed main character. This was one of the few novellas I’ve read recently that felt as if it was constrained by the length; some aspects of the plot were introduced a little abruptly, and I felt that the background merited more development in context to support the characters’ interactions, but the basic story was strong and compelling. Some of Ariena’s reactions seemed a little odd for a being out of her own time by a substantial amount, but Naidin’s mourning for his brother was particularly well-written, and the adventure segment, overall, held together nicely and kept my interest throughout. Definitely a story worth the read; short, suspenseful, and with hints of more to come.

You have subscribed to alerts for J&#039;nae Rae Spano.

You have been added to J&#039;nae Rae Spano's favorite list.

You can also sign-up to receive email notifications whenever J&#039;nae Rae Spano releases a new book.