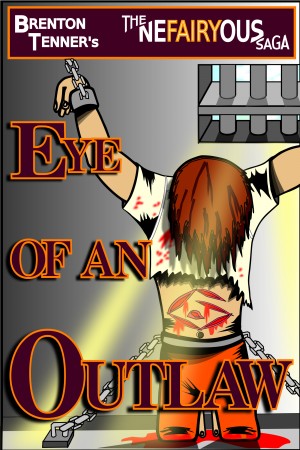 The Nefairyous Saga: Eye of an Outlaw

Rated 5.00/5 based on 1 review
Convicted terrorist, Vivi, arrives at a prison housing the world's most dangerous criminals. A warrior culture and blood lust consumes the prison's inhabitants, culminating in a brutal gang war. A powerful gang leader who dwells in the shadows, threatens the balance of power and the Warden's reign. Is this place just a cage for the worst of mankind, or is there something more sinister at play? More
Prince Vivi Yahalla awakens in a hospital with no recollection as to how he got there. He is badly injured and confused. He is soon informed by the man nursing him to health, "Whistling" Bill Jessup, that he is in a prison infirmary. Through a series of tales told by these two characters, we learn of Vivi's origin as well as the brutal history of the prison known as "The Jungle".

Warden Smiley is the man in charge, however, he provides certain liberties to the four rival gangs in order to keep some degree of peace. Combat and physical strength are what the inmates value and this has lead to certain violent traditions being established, most notably the "Yard Sale". The tales between Vivi and Bill cover both of their histories as well as epic gang wars, power struggles and an uprising of a revolutionary gang of "slaves" that threaten the peaceful facade. Behind the scenes, a mysterious and powerful gang leader has some sinister plans of his own that he is ready to execute.

Discover the folklore of "The Jungle", the origins of it's most prolific inmates and some unexpected twists. What did Vivi do to warrant being sent to this place? What are the agendas of the gang leaders? Why did they choose to save Vivi from being beaten to death during the "Yard Sale"? All of these questions and many more will be answered.

“Eye of an Outlaw” is the second in a series of fictional short stories each of which is part of “the Nefairyous Saga”. This is a collection of dark “fairy tales” that together form an epic saga that introduces interesting characters and gripping story-lines that will keep readers guessing at every turn. Be sure to look out for more information on the other stories in this series in the final pages of this book.

It is not necessary to read the first book in the series, "Welcome to Lily Port", before reading this book. It is, however, recommended that you do so. The main characters are not the same in both books, but certain characters will be introduced that will connect the two stories. Some questions left unanswered in the prequel - related to Abel and the Mountain Man, for example - will also be answered in this second installment.
Download: epub mobi (Kindle) pdf more Online Reader
lrf pdb txt
Price: Free! USD
Add to Library
Create Widget
Tags: mystery prison terrorists storytellers dark fairy tale norse mythology gang wars violent action warriors and slaves episodic short story series
About Brenton Tenner

I am a devoted husband and father and a life-long geek. My passions and hobbies range from video games, series and movies to reading and software development. My goal was always to become a video game developer but that dream got lost somewhere along the way. After completing my studies, I became a software developer specializing in business systems development. I have a BSc degree in both Computer Science and Mathematics and an Honors degree in Computer Science.

After spending more than a decade in the world of software development and achieving great success in that area, I took a step back to reflect. I came to the realization that despite having had a great career thus far, I had lost sight of what made me passionate as a kid. I then picked up mobile video game development as a hobby and developed some indie games for the Google Play Store. Although I really enjoyed the whole indie "vibe", I came to realize that my true passion was not in the programming side of video game development, but what really drove me was creating and developing stories and interesting, unique characters. It all made sense: the common thread that existed in all my passions and interests was not software development or anything like that, it was story telling.

That brings me to where I am now: a father, a husband, a geek, a couch potato, a software developer and an aspiring author who hopes to bring fantastical, fictional tales to the world. As a fan of series and graphic novels / comics, I have chosen to write my tales as short-stories that the reader can finish quite quickly - similar to the concept of a season of a television series. My goal is to release each subsequent issue within a short amount of time so that the readers constantly have something to sink their teeth into without long gaps between the release of the books.

I aim for my work to be like my favorite video games, graphic novels, series, etc: suspenseful, gripping, shocking, character-driven and not for the faint of heart and I truly hope that anyone who does me the honor of reading them not only enjoys them but can't wait to get hold of the next one.

About the Series: The Nefairyous Saga

A fictional series of short, episodic stories steeped in mystery that explores the lives of many seemingly disparate characters slowly uncovering their connections to events that could change the world as we know it. A proliferation of terror attacks, serial murders and other villainous activities around the globe threatens society. Are they all random or is there a more sinister "game" afoot?

Also in Series: The Nefairyous Saga

Reviews of The Nefairyous Saga: Eye of an Outlaw by Brenton Tenner

Most of what I observed in the first installment of the Nefairyous Saga remains true of the second. OF course, this time around I went into the book with a mindset to embrace the 2nd person POV and look at it like I was in a mystery or a video game (thinking the old Myst series where the goal was to try and figure out the mystery through experience.) Some of the writing does flirt more with the third person POV in aspects (sometimes it seems like there is no limit to the knowledge we get as the reader. If I'd change anything in the series it'd be that--but it does help keep these stories as relatively short and perfect for the casual reader--kind of like choose your own adventure books.)

Detective Lincoln (from the first book) is absent. I was fine with that. I really did think the author did a better job of worldbuilding and keeping the immediacy of the books events, well, immediate. There is some backstory, for sure, but less so than we saw with the Wishbone killer in book 1 and it helps keep the reader in the element, so the writing style certainly improves between the books. The setting is also improved--partly just in language and names which have a distinct foreignness to them (in the first book I struggled to stay in the setting as some things seemed too familiar at times.)

I am glad to see multiple installments of something labled as a "saga" or series. Those of you who follow my reviews on my blog or via my author/reviewer profiles know that I'm irked whenever I see a novel proudly listed as "Book 1 in the exciting new series you never heard of and which will never see a second installment!" Make sure that you visit the Author's homepage and send him some love and beg for a new story if this sort of 2nd person POV immersive storytelling is your cup of tea.

You have subscribed to alerts for Brenton Tenner.

You have been added to Brenton Tenner's favorite list.

You can also sign-up to receive email notifications whenever Brenton Tenner releases a new book.