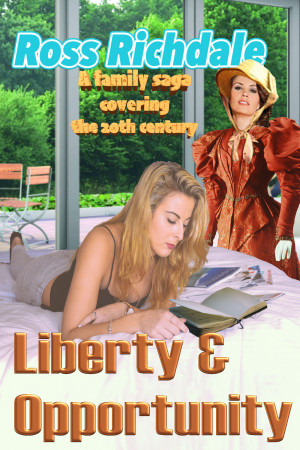 By Ross Richdale
Rated 3.00/5 based on 1 review
In 1898 Amanda elopes with Jack and develops a publishing empire.

Daughter, Dorothy falls in love with a soldier about to be charged for desertion from the trenches in WW1. In World War 11, Cindy becomes a Land Girl in war torn England and tragedy strikes the family.

Each period has drama and sometimes tragedy, but vividly illustrates the determination of each woman to enrich her life through More
Liberty and Opportunity is a family saga centres around four forthright, liberal women, spans five generations, three continents and two world wars throughout the twentieth century.

The story begins in present day New Zealand when Nicole receives an ancient diary from her Canadian grandmother, Cindy that she begins to read. It begins in 1898 with Amanda's elopement with her beloved Jack and her struggle to survive and prosper away from her domineering father in Washington State. The two begin a new life in Vancouver, Canada where, over the years, she develops a publishing empire.

Her daughter, Dorothy becomes a nurse serving in England. She falls in love with a soldier about to be charged for desertion from the trenches in the Western Front in World War 1. Will he be court-martialled and shot?

Each period in time is filled with drama, joy and sometimes tragedy, but vividly illustrates the determination of each woman to enrich her life through love of partners and families and a liberal outlook on life.
Available ebook formats: epub mobi pdf rtf lrf pdb txt html
Price: $4.99 USD
Buy Add to Library Give as a Gift
How gifting works
Create Widget
Tags: romance family saga historical novel ross richdale
About Ross Richdale

The stories were compelling. The four women profiled had different experiences, so it wasn't repetitive going from one generation to the next. My favorite was Dorothy, the nurse in WWI.

I would have rated this as four stars, but there were too many places where the book could have used a proofreader or copy editor. Supporting characters' names changed with no explanation (a dialogue between Molly and Amanda suddenly has "Mary said"; the farmer's wife in Cindy's story was sometimes Edith and sometimes Edna.) Incorrect words that sound similar were also a common problem. (Bad guys were referred to as "oaths" instead of "oafs"; a small room was called a "cubical" instead of "cubicle"...)