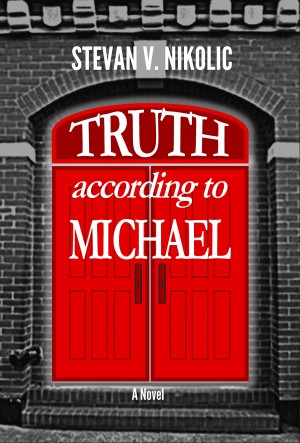 Truth According to Michael

Stevan V. Nikolic was born in Belgrade, Serbia in 1958 and moved to New York, USA in 1987. He began his literary career as a poet before turning to non-fiction and fiction.

As a writer, he spent last nineteen years studying various forms of esoteric spirituality. Mr. Nikolic is the author of nine creative nonfiction and three fiction books published in English, Serbian, Spanish, and Portuguese language: Royal Art (2006), The Peace of the Rose (2007), Freemasonry in Serbia (2011), On the Square– Decoding Freemasonry (2013) , The New Alchemy (2016), Spiritual Guide to the Secret of Birth - a four books series written in Serbian language, on Astrology, Alchemy, Kabbalah, and Ancient Mysteries (2010/2011), and novels Weekend in Faro (2014) Truth According To Michael (2016), and The Diary of the New York Baker (to be released in March 2019)

He lives in New York and works in POD and web publishing as a writer, translator, and a web designer. He is the editor-in-chief of the Adelaide Literary Magazine.

Review
Ana Pereira reviewed on Oct. 16, 2016
(no rating)
The door on the cover is closed, but if you knock, it will always open.
It's a long journey, ​long book, very detailed. The main character will lead you to a homeless shelter with a christian program to help their "students" to get on their feet again. He also tells how he end up there to the wise and jolly Pastor who was his conselour. They don't always have the same point of view about religion, and it's interesting to read their arguments.
The story unfolds in a slow pace, with lots of dialogues, some parts may be repetitive, even boring; others may be enlightening, funny, sensual, or even poetic. It's a quite a big patchwork.
At the last chapters, the rythm changes, becomes feverish. Short dialogues, less detail, it hurries to the end. And the end... well, it doesn't quite feel like an ending. Maybe it's because there will be a sequel. This one is the second of a series wich I didn't read the first (Weekend In Faro), but after the reading you'll know what weekend the title refers to.
So far, I don't really know how to describe Michael or what kind of truth is he preaching. Truth is subjective, anyway. Not sure if he's a visionary or a lunatic, I guess a little bit of both. One thing I'm sure: I'm not sorry for opening that door and I would like the journey to continue... with a little less detail and repetition than the begining, maybe not so fast as the end, if it's not asking too much!

You have subscribed to alerts for Stevan V. Nikolic.

You have been added to Stevan V. Nikolic's favorite list.

You can also sign-up to receive email notifications whenever Stevan V. Nikolic releases a new book.