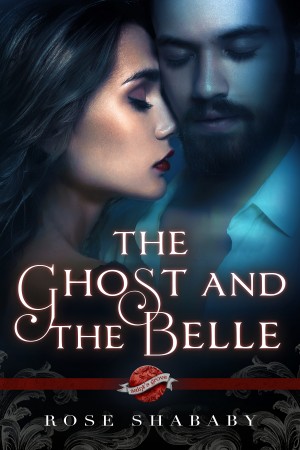 The Ghost and the Belle, A Saint's Grove Novel

Rated 5.00/5 based on 1 reviews
Irene Bell prefers to spend her days tending her bookstore in the sleepy town of Saint’s Grove, but when a paranormal event tears a rift between realities, the entire town is thrown into chaos. It also bring a sexy ghost into her life, one she's determined to help crossover. The only catch? She can't seem to stop herself from falling in love with him! More
Always a loner, Irene Bell prefers to spend her days tending her little bookstore in the sleepy little Virginia town of Saint’s Grove. After all, she tells herself, what other company does a girl need when she has her books?
But when a much anticipated lunar eclipse and planetary alignment bring a meteor that tears a rift between realities, the entire town is thrown into chaos as mythology becomes reality.
A reality that includes a drop-dead gorgeous ghost named Benjamin Churchill, who appears naked and unconscious, smack dab in the middle of her store.
A chance meeting with a witch reveals he’s been cursed, his body and soul bound to his former office, now Irene’s bookstore. The only way to break the curse is to assemble the long-lost pieces of a mystical artifact known as the Star Anthame, a knife created by magic and cursed by the darkest witch Saint’s Grove has ever known. No one knows where the pieces lay, and worse, they aren’t the only ones looking for it.
Racing against a ticking clock, both Irene and Benjamin must fight the irresistible attraction between them.
Breaking the curse means Benjamin can finally cross over. Failing means he’ll be stuck between worlds for another thousand years. And no matter how hard they look, they can’t seem to find a way for him to stay.
What’s a girl to do when the man she loves is a ghost?

Rose Shababy lives in eastern Washington State. She grew up in the Northwest but swears she’s going to move to warmer climates someday. She’s claimed this for over 20 years, however, and has yet to move more than 75 miles away from her mother.
Rose has a deep love of all things Star Trek and yearns to travel the heavens, as well as an intense desire to be bitten by a radioactive spider. Unfortunately she sucks at science and math so she hasn’t been able bring her dreams to life, instead living vicariously through books, comics, television and film. She hopes to someday make a million dollars so she can afford to buy her way to the international space station, but she’d settle for being able to fly around the world and leap tall buildings in a single bound.
Rose also loves to cook and worked for years in a gourmet Italian grocery and deli where she learned to hone her skills. She often prepares culinary masterpieces, but fervently wishes the dishes would wash themselves. Especially now that her dishwashers/children are grown and no longer live at home.
Rose likes to use her free time wisely. For instance, she likes to daydream, will often read for hours until she falls asleep on the couch with an electric blanket and a warm tabby cat curled up on her hip, as well as spending cozy weekend days watching Syfy movies like Sharknado and Mega Piranha.
If Rose were a cartoon animal, she’d prefer to be a wise old owl or a sleek and sexy jaguar, but in reality she’d probably be a myopic mole with coke-bottle glasses.

Wow! What a fantastic read! It makes you feel so much emotion, the anticipation was incredible. I loved the character's! No plot flaws, the author left all questions answered. Some omg moments to. Can't wait to read more of this authors work.

You have subscribed to alerts for Rose Shababy.

You have been added to Rose Shababy's favorite list.

You can also sign-up to receive email notifications whenever Rose Shababy releases a new book.