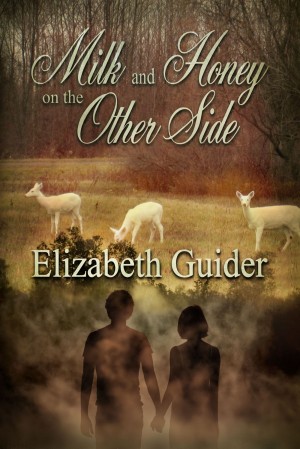 Milk and Honey on the Other Side

By Elizabeth Guider
In a rambunctious river town unsettled by the Great War and up-ended by change unlikely lovers are brought together—but dogged by inescapable bigotry. Despite the dangers, the heroine defies her southern upbringing; the hero fends off his inner demons.

Elizabeth Guider is a longtime entertainment journalist who has worked in Rome, Paris and London as well as in New York and Los Angeles. Born in the South, she holds a doctorate in Renaissance Studies from New York University. During the late 1970’s, she was based in Rome where she taught English and American literature and where much of the action of her first novel, The Passionate Palazzo, takes place.

While in Europe, she worked as an entertainment reporter for the showbiz newspaper Variety, focusing on the film business, television and theater. She also traveled widely, reporting on the politics affecting media from Eastern Europe to Hong Kong as well as covering various festivals and trade shows in Cannes, Monte Carlo, Venice and Berlin. Back in the States since the early 1990’s , she specialized on the burgeoning TV industry and eventually held top editor positions at Variety and latterly at The Hollywood Reporter. Most recently she has freelanced for World Screen News as senior contributing editor.

She mostly divides her time between Los Angeles and Vicksburg, MS where she grew up and which is the setting for Milk and Honey on the Other Side.

You have subscribed to alerts for Elizabeth Guider.

You have been added to Elizabeth Guider's favorite list.

You can also sign-up to receive email notifications whenever Elizabeth Guider releases a new book.