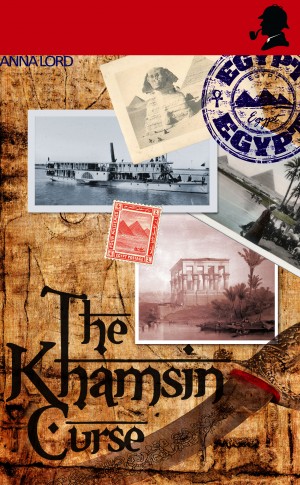 By Anna Lord
April 1900, Egypt. Watson and the Countess are recruited by Mycroft Holmes and enter a world of espionage, intrigue, and a race against time. The British Foreign Office is scrutinising every move as Major Nash goes undercover, Colonel Moriarty is en route to the Boer War, and Sebastian Moran is a gun-for-hire... Can our duo uncover all the schemes surrounded by mystical temples and ancient gods. More
Book 11 in a series of chronological stand-alone plots.

April 1900, Egypt. Dr Watson and the Countess are recruited by Mycroft Holmes to investigate acts of espionage undermining the British effort in the Boer War. A renowned Egyptologist finds himself under Foreign Office scrutiny, all whilst trying to save the temple-island of Philae from the Aswan Dam's rising waters.

Sultry nights along the Nile, cruising paddle-steamers, and awe-inspiring hypaethral temples - what could be more romantic?

With Major Nash working undercover, our Colonel Moriarty en route to the Transvaal, and Sebastian Moran as gun-for-hire - with sabotage, fraud, murder, and the Khamsin itself... Forget romance!

Anna Lord has long been fascinated by myth and metaphor, and the way they inform human thought. With an English and Philosophy degree focused on metaphysical poets and logical thinking there was only one creative avenue for her to follow: two rational detectives battling to make sense of a superstitious gas-lit world.

Anna's Ukrainian background, coupled with a love for whodunnits, Victorian settings, and Gothic characters, inspires her literary world and makes the books a joy to write.

The result is her new series: Watson and the Countess.

You have subscribed to alerts for Anna Lord.

You have been added to Anna Lord's favorite list.

You can also sign-up to receive email notifications whenever Anna Lord releases a new book.