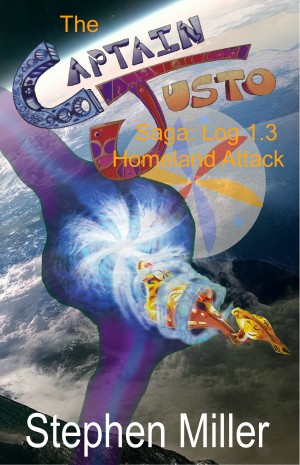 By Stephen Miller
Is Captain Marion James Justo the only alien on planet Earth or is tech genius Uncle Cenric an alien pirate? Captain Justo gives Christopher and Daniel each a training tool called a Dream Teacher. When Benny Strong steals one it sets off a dangerous chain of events. Home Land Security is closing in, Uncle Cenric is acting more dangerous and their dad has collapsed, unable to wake up. More
Marion James Justo, a starship captain from a galaxy billions of light years away, may not be the only alien currently visiting planet Earth. Is Uncle Cenric a brilliant billionaire tech genius. . . or is he actually an alien pirate who is selling little pieces of advanced technology for his own mysterious purposes?
While Captain Justo continues making repairs on his golden starship he gives Christopher and Daniel Sterling each a powerful training tool called a Dream Teacher. The device sends training materials directly into their subconscious mind. Their training goes well until their worst enemy, Benny Strong, steals one of the Dream Teachers, setting off a dangerous chain of events.
Home Land Security is closing in, Uncle Cenric is acting increasing dangerous and to make matters worse their father has collapsed in a field and is unable to wake up. Do they dare take their father aboard the starship to try and wake him, or will Captain Justo have to turn himself over to Homeland Security to secure their safety? And worse yet, will their boy crazy sister, Amber, discover what is going on and ruin everything?
Available ebook formats: epub mobi pdf lrf pdb txt html
First 20% Sample: epub mobi (Kindle) lrf more Online Reader
pdb
Price: $3.99 USD
Buy Add to Library Give as a Gift
How gifting works
Create Widget
Tags: pirates boy adventure family adventure aliens science fiction golden starship
About Stephen Miller