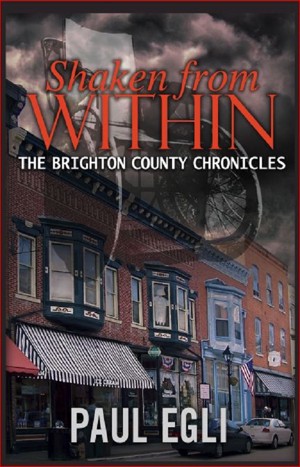 Shaken from Within: "The Brighton County Chronicles"

Paul Egli was raised on a farm, has always lived in Iowa, and would not trade his upbringing for anything. He graduated from Dubuque Senior High School in 1981 and from the University of Iowa in 1986.
Soon after college, Paul married Julie. They moved to Bettendorf for three years and then returned to Iowa City, where they’ve lived, worshipped, worked, served as foster parents, adopted four children, raised a beagle and two dachshunds, and still remain today. Paul has been blessed with wonderful family and friends. He says, “It’s a wonderful life!”
Although Paul’s characters are fictional and inimitable, backdrop from his life seems to find its way onto the page. Fictional Mike Ward and factual Paul Egli, for example, happen to have the same disability – quadriplegia, paralysis from the chest down.
“In a way, it was easy to bring Mike to life; his daily challenges are just like mine. In another way, it was painful; Mike kept reminding me of my own struggles. I hope that’s where the comparison ends. Once you know Mike, you’ll see what I mean.”
Not an overly prolific author, Paul believes that quality is much more important than quantity. “I would much rather give readers one outstanding piece of work – one that moves, inspires, transforms, or at least profoundly entertains – than thirty that are soon forgotten.”
He has been accused of obsessing over his writing, and he takes it as a compliment. “I don’t see any point in producing just another novel. If it doesn’t have an impact, then it isn’t worth the time. The reader lets you know if you’ve delivered something great.”

Reviews of Shaken from Within: "The Brighton County Chronicles" by Paul Egli

You have subscribed to alerts for Paul Egli.

You have been added to Paul Egli's favorite list.

You can also sign-up to receive email notifications whenever Paul Egli releases a new book.