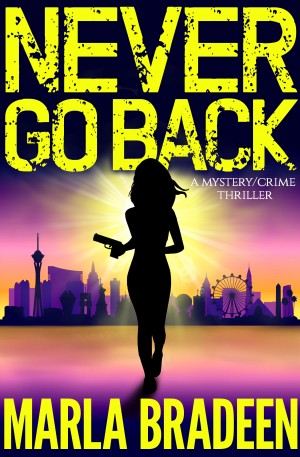 By Marla Bradeen
Rated 3.00/5 based on 1 reviews
Beyond the glitz and glamour of the Las Vegas Strip, someone is about to die.

Alison Carter's world is upended when her boss is murdered in front of her eyes. What she doesn't know is things are about to get much, much worse.

Detective Brad Gilmore has dealt with his fair share of homicides, but he's about to face the biggest challenge of his career. What he expects to be a straightforward murder investigation turns into anything but. Yet with all evidence pointing to Alison, he's under pressure to wrap things up quickly.

Now Alison and Brad are in a race to find a killer. If Brad fails, this may be the end of his career. But for Alison, the stakes are much higher. The happy life she once took for granted is in danger of being shattered forever . . . and she just might end up serving time for a crime she didn't commit.

Visit Marla's website to learn more about her and her books: http://www.marlabradeen.com

Marla Bradeen previously worked as a software consultant and analyst. In 2012, she gave up a traditional job for no other reason than to have more time to pursue personal interests, such as sleeping in late and taking naps. Although she misses seeing regular deposits into her bank account, she hasn't once regretted that decision.

These days, Marla enjoys inventing imaginary friends and killing them off. She's thrilled to have finally found a use for that bachelor's in psychology: getting into her characters' heads. When she's not plotting murder, she spends her time fighting for mattress space with her two rescue cats.

She also writes cozy mysteries under the pseudonym Paige Sleuth.

Never Go Back, by Marla Bradeen is a murder mystery set in the quiet little town of Las Vegas, Nevada. (It's quiet if you don't go into the casinos or don't stay out after 7pm. Right?)

I have to admit that I have a soft spot for detective novels, so keep that in mind. I read a lot of different genres, but I always come back to the whodunit. As long as someone did something bad and someone is trying to figure it out, I'll probably like it. There's a pact between writer and reader in the mystery category. The writer will keep the reader in the dark, doling just enough to get their brain thinking they can figure it out, but keeping just enough hidden to make the reader turn the pages. The reader's part? They keep turning the pages.

I think Marla Bradeen keeps up her end of the bargain here. By throwing the crime in right at the beginning, she sweeps you up in events before you can even think "Hey, wait, who are these people?" Then she doles out pieces at a time over the course of the fluid narrative.

When I say fluid narrative, I mean that, to me, everything flowed naturally. I didn't get the idea that there was a master plot she was holding on to and forcing characters into. It felt like the story moved organically from one scene to another based on character choices. The story alternates between Alison and the lead detective, as each goes about their business of solving the case. It actually works well because it provides a bridge of suspense between each chapter without stringing you out for long. And, of course, there's a lot of dialogue, which I live for.

On the other hand, the narrative left some room for additional character building. I wasn't sure the stakes were high enough for Alison to make some of the choices she did early on. Her husband turns on her rather quickly and I couldn't help but think maybe there should have been an underlying problem there already, or some other obstacle or character flaw that would guide some of her decisions. This would have lent more drama to her part. The mystery was satisfying, but it could have been more so if there were deeper character goals to resolve. It's harder to do than it sounds, but it's there nonetheless.

The same with the lead detective. He has issues with his new, wet-behind-the-ears partner. I would have liked to have seen the tensions externalized in how the characters interacted with each other (again, creates more drama). But most of the troubles in that relationship existed in internal monologues.

That said, several minor characters shined in their limited page-time. The victim's sort-of grieving wife and the girl who goes by the name Candy in particular felt alive as soon as they hit the page. Maybe it was my own imagination adding things, but I really liked those characters and the way they were written.

So, there's a little push and pull here and, of course, it's all subjective.

Never Go Back is an enjoyable, light-reading mystery that could have used a little more drama, but the organic storytelling and interesting mystery kept me turning the pages.

You have subscribed to alerts for Marla Bradeen.

You have been added to Marla Bradeen's favorite list.

You can also sign-up to receive email notifications whenever Marla Bradeen releases a new book.