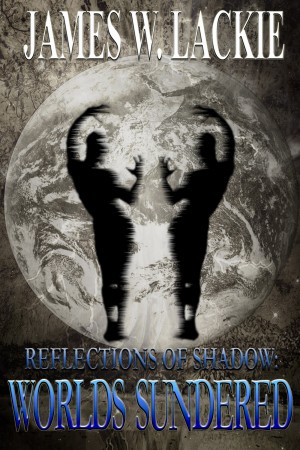 Alexander Ganainmh’s internal struggle has come to an end. The aspects of dark and light that warred within him have been made flesh, manifesting as two men – one the embodiment of all that was good in him, the other his malevolence incarnate. Now, as a new war between them rages, each man fights to eliminate the influence of the other, amidst a backdrop of love, lust, rebellion, and betrayal. More
Two men. Two worlds.

As the events of Reflections of Shadow: Nemesis Spawned unfold, and Alexander Cadeyrn wrestles with the evil inside him, Alexander Ganainmh’s internal struggle has come to an end. The aspects of dark and light that once warred within him have been made flesh, manifesting as two men – one embodying all that is good and honourable within him, and the other an incarnation of the malevolence that he had long fought to contain.

Now, against a backdrop of love, lust, rebellion, and betrayal, a new war rages on.

Reflections of Shadow: Worlds Sundered follows these two men as each fights to eliminate the influence of the other, while pursuing their own goals for the worlds around them. Little do they realize, however, that, for all their might, they are merely pieces in a much more elaborate game. Avatars – immortals who would use the two men for their own ambitious ends – shuffle them back and forth between worlds. From Seteris, where a fragmented reality has left the world in chaos, to Lloryca, where the avatars have set the stage for a confluence of events, these two men will change the course of history with power and blood.

Worlds Sundered is the second tale in the Reflections of Shadow series.

James was born and raised in eastern Ontario, and graduated, in 2003, from Queen’s University with a B.A. (H) in Psychology.
James started writing fantasy and horror short stories at the age of 16, and has continued ever since. Between writing and dabbling in art projects, he also enjoys reading, watching movies, playing video games, and spending time with his family and friends.

You have subscribed to alerts for James W. Lackie.

You have been added to James W. Lackie's favorite list.

You can also sign-up to receive email notifications whenever James W. Lackie releases a new book.