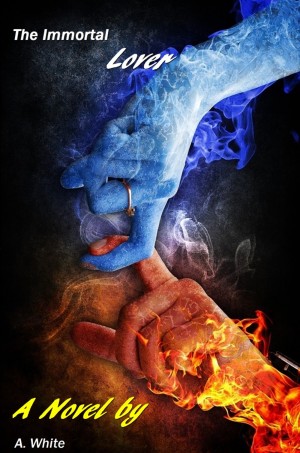 By A. White
This incredibly handsome man with versicolored hair is like none other. His capability to enhance a woman; mortal or immortal is what has made him a legend before the creation of our world. He takes love but rarely, sincerely gives it. His hands and lips are sweltering hot but his heart is cold. His heart is unable to be captured for it belongs to another. One he has sought since he lost her. More
Down through the ages of human history his name has been heard and often feared. He's know by many names; king of hell, demon, destroyer, all which is wrong with the world. But many has known him in a different light. A tender light. He's the legendary lover that legends are made from. Many believe he may had been Casanova, himself or most definitely Don Juan. Some say he's actually Eros. But a few have known for sure and lived to tell the story. Few knows his heavenly name is Azazael. Most knows hm by his terrifying fallen name; which is Azazel.

After his fall from Grace he was thrown into hell. He became the epitome age old adage, "Heaven doesn't want me and hell is afraid I'll take over." For that's exactly what Azazel did. Took over and made himself the king of hell. He ruled the cthulhu realms with a relentless iron fist, he dethroned the lord of darkness and reign supreme for eons upon eons. He built cities, added structure. Turned hell not into a place of punishment if one obeyed him. Hell was no longer a place of punishment as to why heaven puled him out. Hell is supposed to be a place of punishment.

During his diabolical reign, there was one thing his heart never grew cold to and that was the love of his second wife whom he lost before falling from Grace. The severity of his many imprisonments and divine mind erasures have left his mind foggy to what she looked like but he remember her tender love for him. Driving her away has been his only regret.
Available ebook formats: epub mobi pdf lrf pdb html
First 15% Sample: epub mobi (Kindle) lrf more Online Reader
pdb
Price: $3.99 USD
Buy Add to Library Give as a Gift
How gifting works
Create Widget
Tags: love lost azazel ancient god lovers lover romance romantic lost and alone war against humans draconic powers warrior king hell and heaven immortal gothic romance historical gothic occult paranormal paranormal romance salem witches vampires sensual
About A. White

The Muse's Port is pride to present to the world the literary works of A. White. A. White is an author of paranormal fictional/romance/historical.

A. White lives in the Adirondack range in upstate New York. She have been writing for over fifteen years. She took classes in creative writing in college, specializing in ancient myths and legends. And another course at a local community center while living in Chicago. In college she won the national contest to verbally list every country in the world, it's capital and ingenious language. Her works are mainly paranormal, horror, fantasy, and sci-fi as well as, as some may says, ";the truly strange predicament and puzzling;" Books that she have written are "Clash with the Immortals," and fourteen others which are part of the Unholy Pursuit Saga.

She began working on the Chronicles in 2001 but wished to complete them before introducing them to the public. The ideas of the books came from classic literature such as those whose works have greatly influence the world: Homer, Sophocles, Herodotus, Euripides, Socrates, Hippocrates, Aristophanes, Plato, Aristotle and many others. "The Book of Enoch" influenced the usage of Azazael or Azazel as a main character and love interest. She created the primary main character from the Chronicle of Saints. She wanted to show them as real flesh and blood with thoughts, desires and yearning as any human. Not as they are so often depicted. So she created one of her own to show her as a real human which everyone can relate to.

Unholy Pursuit: The Devil on My Trail.
Clash with the Immortals
The Time Before Time
The Foregate of Hell
Unwritten
The Immortal Lover
A time for all seasons

Read A. White's Smashwords Interview
Learn more about A. White

Reviews of The Immortal Lover by A. White

You have subscribed to alerts for A. White.

You have been added to A. White's favorite list.

You can also sign-up to receive email notifications whenever A. White releases a new book.