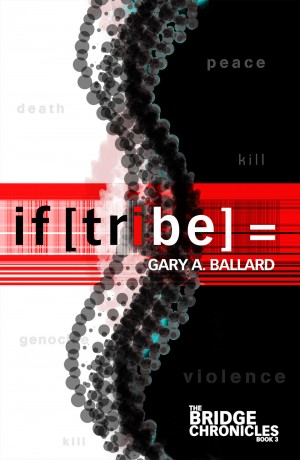 By Gary Ballard
Rated 4.00/5 based on 1 reviews
L.A. street gang Los Magos' leader is assassinated by the rival El Diablos, both members of the Five Families. Gang war would bring the wrath of the corporate police department down on all the Families. Amoral fixer Artemis Bridge discovers the war is more than tribal bloodletting, and must use his wits to stop the war before it escalates to genocide in the latest Bridge Chronicles novel. More
Leader of the Los Angeles street gang Los Magos is assassinated by the rival El Diablos. As members of the Five Families, war between the two gangs could ignite the whole city, prompting a response from the Chronosoft Law Enforcement Division (CLED) that could destroy all the Families. Artemis Bridge, the amoral fixer with the quick wit vows to stay out of the war despite his friendship with ex-footballer turned gangland revolutionary Stonewall, new leader of Los Magos. Bridge is reluctantly pulled into the middle of the worst civil unrest since the 2027 Riots, where he discovers the war is more than a little tribal bloodletting between rivals. This fast-paced, action-packed cyberpunk thriller is the third in the critically acclaimed Bridge Chronicles series, sequel to Under the Amoral Bridge and The Know Circuit.

This is the third and final novel in "The Bridge Chronicles", a cyberpunk trilogy set in a near future where corporations own contracts for law enforcement and local government. The premise is not too far-fetched, but the uncomfortable plausibility is offset by a punchy storyline seen through the eyes of the coolest anti-hero money can sometimes buy.

I have enjoyed the entire trilogy of "The Bridge Chronicles". The main protagonist is gutsy, seemingly amoral at times, clever and decisive. I’ll take my heroes flawed thanks and Artemis Bridge is about as suspect a role model as anyone could ask for. He’s not just the guy who knows a guy, he’s the guy who’s working every angle, turning even the most horrible events into a morally ambivalent victory.

The plot moves quickly and is greatly entertaining. Immersion in technology is inevitable, but relatively painless. Virtual worlds, super powers through the control of mathematics and cybercops all dance with the good stuff – greed, power, dog-eat-dog and the almighty deal. I think of The Bridge Chronicles as “Snow Crash lite”. The technological aspects of the story are a bit more accessible, the writing slightly less dense, but the feel is similar. It’s a great compliment as Snow Crash is one of my favourite cyberpunk novels.

In this novel the story focuses on the illegal gangs of Los Angeles that run their businesses within the warehouse district of the city. The author has managed to paint an interesting picture of gang life with individual gang leaders adopting philosophies such as Darwinism, Communism and Pacifism. It’s actually interesting to see a world where those that are considered upstanding are only interested in power and wealth and those that are considered criminal are more interested in humanity and ideology.

If you like your cyberpunk readily digestible, your plot punchy and clever and your characters dripping with cynicism while you walk the tightrope between entertainment and uncomfortable near-reality, give this trilogy a chance.