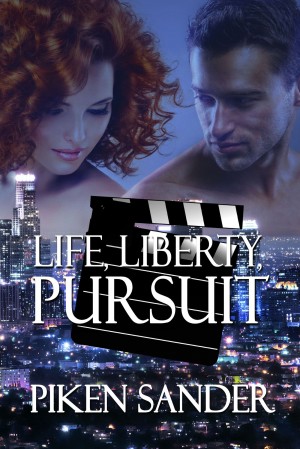 She starts a new life as Sanapia Jones, whose life becomes a whirlwind of overnight success as an actress and singer and romance with Hollywood hunk Marc Brand, surrounded by the elite of show business, but pursued with a vengeance by a model-turned- stalker who thinks Marc belongs to her.

Piken Sander lives among sprawling oak and aspen in Northern California to where she escaped from colder climes many years hence. Her randy Auntie asked her to ‘tell her a story’, demanding that there be strong women and steamy passion, and this began the writings of Piken as she crafted stories of girl meets boy, girl and boy go through the torture of life and beyond, with at the very least hopeful endings. When her Auntie passed, she left her niece a one sentence note in her will: “Now publish the damn things.” Piken’s day consists of writing and social media, and such difficult decisions as which of her dizzying array of wildly colorful pajamas she should wear on a given day. She loves a perfectly steeped cup of good tea. She has few she calls friends, but those in this cadre are cherished and fostered. A political liberal since preteens, she tolerates no racism or bigotry or inequality of any kind, especially in her stories.

You have subscribed to alerts for Piken Sander.

You have been added to Piken Sander's favorite list.

You can also sign-up to receive email notifications whenever Piken Sander releases a new book.