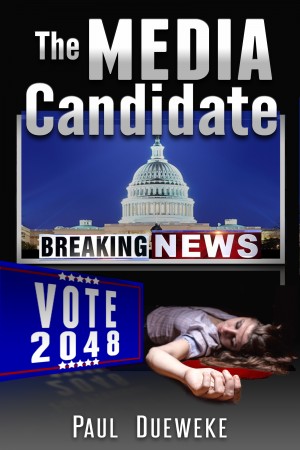 The Media Candidate – politics and power in 2048

By Paul Dueweke
In election year 2048, candidates are media celebs. Campaigns are game shows. TV networks have merged with political parties to run "quality" candidates. A Government agency assures everybody plays by the rules using an advanced neural network and robots as enforcers. A Nobel physicist discovers technology-driven fraud that even the media parties don't suspect—and ends up on a neural-net hit list. More
The Media Candidate is a rigorous, high-tech, action-thriller novel studying the merger of politics and the media, set in the presidential election year 2048.
Politics in the mid twenty-first century has evolved to political game shows they call elections and to multimedia hype, sex, and trivia that sustains and embodies society. These are the icons of the reawakening of the American spirit of political participation. But behind this facade lurks an age old establishment sired by opportunities that aggressive humans have seized in every generation and in every fold of the social fabric.
This social revolution mirrored a dazzling technology upheaval, an eruption which engendered a new player in the Government’s bureaucracy: an advanced neural-network computer. Trained to serve, to be a neurocrat, it transmuted into a clandestine monarch. This super computer contrived its own Boolean paranoia and a ruthless strategy that served it well against humans. Only a pair of humans struggled to understand it—its creator and a hacker. But neither had the insight to fear it.
The computer lives at COPE, the Committee for Political Equality, a powerful Government agency formed by the first US President from one of the new “media parties.” COPE’s function is to maintain “a level playing field” for the political process, thus tightly controlling the political arena. Sherwood is a sinister and brilliant engineer turned spy and behavioral scholar. He teams with another nerd, the same hapless hacker who is on a collision course with the neural network, to tackle one of the most sensitive jobs at COPE—debugging COPE’s most efficient enforcer of the new century’s “disciplined democracy”: a cunning spider robot.
The insightful neural network discovers the benefit of commanding such arachnids. COPE may control the masses, but the real master of this media republic controls COPE, and does it with such finesse that no one even suspects it … at least no one who lives.
The tragic hero, Dr. Elliott T. Townsend, enters this strange world after a career buried in the depths of a high-energy physics lab. He encounters Guinda Burns, a beautiful, young, and naive worker for the CBS Republican Party, and they find themselves opposed by COPE and its enforcers and confronted by Sherwood. But Sherwood stuns Elliott with his insight that human nature is immutable, and that society has evolved very little despite harsh cosmetic changes.
Elliott overcomes robotic spies and spider assassins, but he is not a leader, he is just a fossil of a bygone era, just as Guinda is a loyal daughter of her century. The ultimate question Elliott confronts is—does anyone care?
Download: epub mobi (Kindle) pdf more Online Reader
lrf pdb txt
Price: Free! USD
Add to Library
Create Widget
Tags: murder political evolution television robots computers hard scifi neural networks holography assassins and spies
About Paul Dueweke

I was a research physicist long before I turned to writing. But I’ve written five novels and am presently working on numbers six through twenty-seven. My first was an autobiography, MY LIFE AS IT SHOULD HAVE BEEN — a memoir for readers who find memoirs disagreeable and reality tedious, inspired by my lifelong obsession with Don Quixote and his ingenious view of reality. It took first place in the 2002 Independent E-book Awards - Humor Division. THE MEDIA CANDIDATE is a near-future, speculative science-fiction thriller inspired by watching too much TV. PRIONA is a multi-cultural, multi-generational story of love, poetry, music, and the dividing waters of race, set in the Jemez Pueblo of northern New Mexico. LAMB OF GOD is a psychological drama of how a young boy, surrounded by the racial and commercial tensions of the Arsenal of Democracy, Detroit during World War II, deals with the guilt of being too weak to save his twin from tragedy. It won second place in the 2003 Writer’s Digest Self-Published Book Awards in a field of 370 entries. Finally, ROCKING HORSE WEST is a modern western drama set on a dying ranch in the highlands of southern New Mexico. It was a 2002 EPPIE Award finalist. These books should be available at Smashwords later in 2016, but for the time being, you can get a taste of them at my website fictionQ.com. If you would like me to notify you when my next books hit the ground at Smashwords, drop me a line at editor at fictionQ.

I have spent forty years as a physicist in Ohio, New Mexico, and California. Some of those years I did basic physics research at The University of Dayton in the areas of ionizing radiation detectors, shock waves in solids, and infrared measurements. This stuff probably doesn’t excite very many of you, but it has been breathtaking for me. Call me a nerd, but I love science.

I spent some years at a beltway bandit* doing a funny thing they called system studies. Then I evolved into a mid-level manager for a big defense hardware company. I learned pretty quickly that upper management is really, really hungry. That's why middle management has to run so fast. Now I have become an even higher lifeform. I work off and on for an itsy bitsy company right in the bosom of Silicon Valley. My business card has a blank under my name so I can be anything I want. And I haven't needed a security clearance for the last twenty years.

I’m a firm believer in second careers. When I was doing physics research, I had to do mostly what other people wanted me to do. That was still great because it was such exciting stuff. But now I can write whatever I want to. Maybe that’s just as good, in a way. I think every writer should write as a second career, not as a first. It gives my writing roots and a unique point-of-view beyond writer.

I married Marilyn where we met at the University of Dayton. We moved to Alburquerque** where our two daughters grew up; and now we all live in the San Francisco Bay Area.

FOOTNOTES:
* Beltway Bandit — For those not conversant in Government Speak, a Beltway Bandit is one of the companies clustered around the Washington, DC Beltway that sells “professional services,” which is stuff the Government could do itself if they had any idea what they wanted done or if they weren’t fighting among themselves about who should do it.
** Alburquerque — Most of you traditionally educated readers are probably under the mistaken opinion that the dusty little town in central New Mexico is Albuquerque, not Alburquerque. It was, however, named after Don Francisco Fernandez de la Cueva Enriquez, Duke of Alburquerque, Spain, and Viceroy of New Spain in 1706. About a hundred years later, it was misspelled to its present form. I, in the spirit of Don Quixote de la Mancha, have taken up the cause to redress the evil of misspelling the name of one so highly born.

You have subscribed to alerts for Paul Dueweke.

You have been added to Paul Dueweke's favorite list.

You can also sign-up to receive email notifications whenever Paul Dueweke releases a new book.