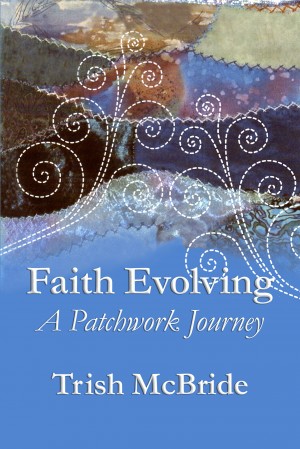 “My purpose in assembling the first edition of Faith Evolving was two-fold: to fill a gap in the spirituality literature by offering a sample longitudinal study of an ordinary woman’s journey of faith, and to encourage readers to reflect on their own journeys. This edition has the same aims!

The hard times are well and truly over and life is enjoyable and mostly peaceful. Good health helps with that, as do plentiful silence, solitude and simplicity – and more quilt-making. Another ten grandchildren have come along, all delicious buds on the family tree.

For me now God permeates everything as Life-Force, and is personally communicating and relational in Jesus, my life companion, and is Holy Mystery. Perhaps this approaches what the Church Fathers were trying to get at when they defined the Trinity!”
Trish, From the Preface to the Third edition

The young adult Trish, who strived to fulfil the expectations of a traditional [Christian] marriage and parish, has passed through the crucible of pain and loss by 2005 to become a mature and joyful Trish. The God, who at the beginning is a demanding figure evoking total blind surrender, is by the end the One who seeks justice in solidarity with marginalised women and men, and who manifests not only in creation, but also as the Quiet within."

Trish McBride spent more than 25 years as a lay chaplain in workplaces, a hospice and a mental health context, and is a retired counsellor and spiritual director. Formal studies included an MA (Hons) in Classics, Diploma in Pastoral Ministry, and recognition as an Associate in Christian Ministry (interdenominational).

Her articles and academic papers have appeared in several periodicals in Aotearoa NZ and elsewhere. She was awarded third prize in The (London) Tablet’s international John Harriott religious journalism competition in 1993, and contributed chapters to five Catholic-based New Zealand theology books by Accent Publications between 2008 and 2016.

These writings have been gathered and supplemented to be the basis of what has now become an accidental trilogy, recording her spiritual journey for most of the last 70 years. Faith Evolving (2005) covered 30 years from the 1970s. Exploring the Presence went backwards, forwards and very widely. And now A Love Quilt covers the last decade. She is passionate about Social Justice, the well-being and stories of women and other marginalised people.

She enjoys family, nurturing her friendships, reading, swimming, and walking, as well making quilts, three of which have appeared on the covers of her books.

Reviews of Faith Evolving: A Patchwork Journey by Trish McBride

You have subscribed to alerts for Trish McBride.

You have been added to Trish McBride's favorite list.

You can also sign-up to receive email notifications whenever Trish McBride releases a new book.