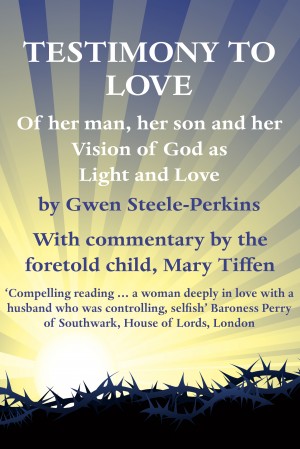 Gwen's words show a woman deeply in love with a husband who was controlling, selfish and often heartless to his wife and children. She appears to accept his behaviour without criticism – yet it is her honest portrayal of his behaviour which tells us of his unlovable character. It is her view of him which tells us what manner of man he was. This remarkable woman lost her husband through his adultery and then desertion. She lost her beloved son in death. Yet her daughter is able to describe how Gwen's courage carried her through to a later life of independence as a business woman and strong single mother to her two remaining children.

Gwen writes of love as the driving force of her life. But overall, it is her faith in the God she believed spoke to her in a vision of light and love which carries her story through. Her vision of the Light was the rock on which she stood through all her travails and is the enduring theme of the story she writes.

I commend this book as compelling reading in its many and varied aspects.'

After studying history at Cambridge University, 1949-1952, Mary tried teaching, one of the few occupations offering equal pay to men and women in the 1950s. Temperamentally unsuited to it, she moved to a charity which paid very substantially less and then to an industrial company which eventually raised her back to the teaching level. In 1960 she met and married Brian Tiffen, who in 1962 joined the British Council. She followed her mother’s example as the supportive wife on his overseas tours in Africa, Iraq and Europe, but, unlike her mother, could also accept paid employment in each place. When her husband took the early retirement on offer in 1984, this experience and the Ph.D. meanwhile taken led to an appointment as a Research Fellow at the Overseas Development Institute in London. For further details see www.drylandsresearch.org.uk. After retirement in 2002 she investigated her own family history, leading to a book, Friends of Sir Robert Hart, Three Generations of Carrall Women in China, 2012, which has been translated for publication in China in 2016.

Reviews of Testimony to Love by Mary Tiffen

You have subscribed to alerts for Mary Tiffen.

You have been added to Mary Tiffen's favorite list.

You can also sign-up to receive email notifications whenever Mary Tiffen releases a new book.