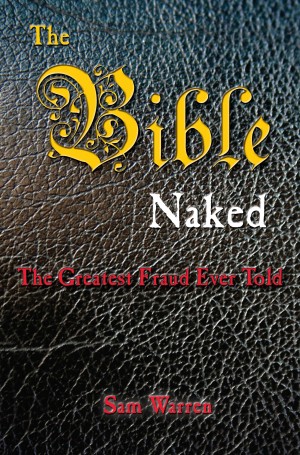 The Bible Naked, the Greatest Fraud Ever Told

Sam Warren started his writing and publishing career in the ‘60s when as an Army sergeant he was attached to the Defense Intelligence Agency and assigned to the American Embassy in Moscow in the middle of the cold war. His first experience as a writer was as a part-time editor of the embassy newsletter, “This Week in Moscow.” He also wrote articles for his hometown newspaper.
After leaving the service in 1970, he attended Orange Coast College and later started a publishing company that published a number of tabloids including a community newspaper “The Santa Ana Journal,” a military paper “The West Coast Military News” and a Spanish language community tabloid, “El Hispano.” He also published Orange County's first gay newspaper and was the founder of the Orange County Gay and Lesbian Community Center.
After selling his business in 1980, he moved to San Diego where he was editor of the “Uptown San Diego Examiner” and published the short lived “Border Business Journal.” His column, “The Baja Beat,“ was published in six community tabloids.
He wrote and published a number of books, including a travel guides, Having Fun in Tijuana, Baja by Night, Sin Diego, and a humor book, The Priest, the Pastor, and the Rabbi.
In 2000, he was arrested on trumped up charges at his bed and breakfast in Playas de Tijuana. The corrupt Mexican police stole everything he owned and he spent over three years in Baja prisons. In 2003, an honest lawyer was able to have all the charges dropped. His book, Tales from the Tijuana Jails, was written about his experiences in three Baja California prisons and the people he met inside.
In addition to book publishing for clients, he is the president of the San Diego Writers/Editors Guild and publishes a webzine for the San Diego writers at http://www.SDWriteWay.org.

You have subscribed to alerts for Sam Warren.

You have been added to Sam Warren's favorite list.

You can also sign-up to receive email notifications whenever Sam Warren releases a new book.