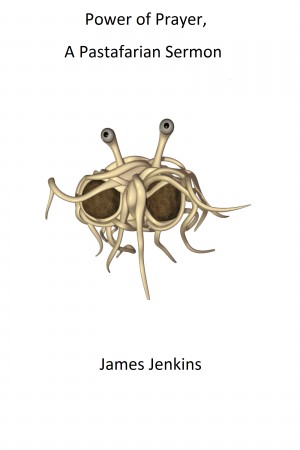 Power of Prayer, (A Pastafarian Sermon)

You might be the target audience if:
* You are comfortable exploring the idea, that the first most popular, monotheistic, creationist, deity in the modern world, might not be the only option.
* You have heard of the FSM and want to learn more
* You like Pirates, Beer or Spaghetti

If you are aware of the FSM or not, if you believe in the FSM or not, there is something fun and thought provoking for you here.
Download: epub mobi (Kindle) lrf more Online Reader
pdb txt
Price: Free! USD
Add to Library
Create Widget
Tags: prayer sermon fsm pastafarian
About James Jenkins

I like to read, OK you figured that out before you started reading this... And I post the occasional Pastafarian sermon. Mostly I read, and I try to write a review for everything I read.

I like to read stories that are new, that stretch my mind and my imagination. Smashwords provides a vehicle for exercising that desire. There are more works posted here for free than I can possibly read, I download the ones that I would like to read, and the ones that look most inviting I try and get read this week. Every week I try to read a few that I downloaded a while back and have not got to yet, so you may see reviews from recent downloads to ones from long ago.

Authors post their work on Smashwords because they want to share what they have often spent a lot of effort working on. I try to review every work that I read, in repayment for allowing me to read it.

My early reviewers are a bit kinder than my more recent reviews. Sometime ago I realized that some works were better than most of the ones I was giving 5 stars to. As there is no way to give 6 stars, I dialed back my ratings a bit. Here is how I currently am awarding stars.

1 Star; this work was not ready to be published
2 Stars: The presentation made me think I would like it, but I didn't like it. I probably did not finish reading it (defined in each review)
3 Stars: AVERAGE - not good or bad, the presentation and the work match, I was not disappointed or overly excited. I am glad I read it and will likely look for other works by the author.
4 Stars: I got more than I was expecting from this work, I am actively looking for more works by this author
5 Stars: I can not believe I did not have to pay for this work! Looking for more works by the author, keeping this one so I can read it again later, it will probably be the foundation of a later famous work by this author.

Review with no stars or no review: I read a book, even though the presentation did not reach out to me. I am not the authors target audience so it is inappropriate for me to rate it with stars.

I read your book and did not give it 5 star review... Sorry but that is not something I do lightly, here are a few popular books that I would give 5 stars to. Before you take offense, ask yourself if your work is really equal to these.

How to fail as a self-published author OR things I see authors do, that don't seem to add value to their work.

Smashwords is wonderful venue for the self-published author to get exposure. It is great place for readers find works that bypass the narrow focus of major publishing houses.

• Ask your friends to post a review as soon as you post your new book on Smashwords.
• Use the description to tell why you are the best author EVER and why the reader should download your book NOW.
• Use lots of descriptive words in your work, never use 2 words if you can get a 100 to say the same thing
• Don’t worry about universe plausibility
• You religion is the best, be sure your readers are left with no doubt about it.
• Publish the first chapter of your novel as soon as possible.
• Try to sell the first book in your series, while offering the other non-stand alone works for free.
• Don't bother proof reading your work
• WRITE YOUR INTRO IN ALL CAPS

Review
Edward Drobinski reviewed on May 30, 2020

I regret reading this! A total waste of time

It's interesting to that the author notes how critical he is in his reviews. He needs to apply the same standards for his work.

This writer comments on typesetting errors, without revealing his conflict of interest.

I came to this sermon after doing a bit of research. You see, my good friend informs me that she is now a Pastafarian. She says she will demand that her new licence photo be taken wearing a colander. I admit that at the moment I am confused. But, after reading your ebook, I can attest that there is something particularly delicious about these ideas.

This article (and whole series) suffers from what I will refer to as “derivation decay.”

Instead of trying to explain what I mean directly, I’ll give you an example.

Imagine you’re at a party, and someone there tells a joke, like the classic one that goes like this:

Q:What do you call ten thousand lawyers all tied up at the bottom of the ocean?

Everyone laughs, and one person makes note of this. New guests arrive at the party, so this person moves to capitalize on what they heard. So, he says- “How do you describe a vast quantity of people drowning in a large body of water? Acceptable homicide because those who practice law are an unnecessary waste of resources!”

And then everyone looks at him in horror. That’s what this series feels like to me. The articles take a sometimes chuckle-worthy joke- the Flying Spaghetti Monster, that had a point behind it- criticizing fundamentalism, and repeats it so many times and in such a ham-fisted manner that it actually makes the original joke itself seem less funny and relevant.

And that’s besides all of the grammatical errors, spacing errors, confusing language and baffling choices like asking four questions in a row without providing a single answer.

In his uniquely whacked-out way, Mr Jenkins presents a good case against the selfishness of prayer for personal gain. A very good satire which I would have awarded a much higher rating if not for his Pastafarian beliefs conflicting with my own Rice-a-ronian tenants.

You have subscribed to alerts for James Jenkins.

You have been added to James Jenkins's favorite list.

You can also sign-up to receive email notifications whenever James Jenkins releases a new book.