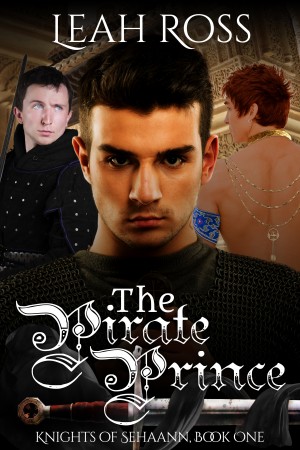 The Pirate Prince: Knights of Sehaann, Book One

As captain of the Royal Guard, Deven is entirely too good at his job. Recognized as the country’s best fighter, he’s sworn to protect his people and his prince with every skill in his arsenal. His vow of service is paramount, even more important than heartfelt promises left behind in childhood. To be a Knight of Sehaann is to fight for prince and country. There’s no room between the constant stream of political threats for distracting emotion.

Kavian is the palace’s finest pleasure slave. Distraction personified. Property of the crown, his job is only to ease the stress of the privileged aristocrats who have need of him. He sees the things that the nobles hide from each other and hears their secrets. He would be a formidable enemy if those who used him bothered to give him a second thought. No one realizes that he’s an even more dangerous ally.

Three lives are hopelessly tangled together in a web of jealousy, duty, and ambition that none will escape unscathed. With opposition in every corner and every watchful eye looking for a weakness to exploit, one wrong move means treason, war, even death. All of them must decide where their loyalties lie and which sacrifices are just too much to bear. Oron knows one thing for certain, though. If he’s going down, he’s going down fighting.

About the Series: Knights of Sehaann

Sehaann is a land of chivalry and honor, of nobility and royalty. It’s also rife with political machinations and status achieved at any cost. To live among the Enuldesh is to manipulate your way to the top or get kicked into the gutter. There is precious little middle ground.

As one of the most powerful magical races of Syndraya, the Enuldesh command a level of respect not enjoyed by many other beings. With power comes corruption, though, and stories of Enuldesh coups are legendary. Peace is a tenuous prospect, at best, and the residents of Sehaann are always preparing for the next political upheaval.

Only one has the ability to bring lasting peace. The one who was never supposed to take the throne. The outsider among his own people. The reluctant heir to his father’s distinguished legacy. He must lead his warriors and his people through the maze of treachery and deceit or civil war will destroy them all. Even among the prestigious Knights of Sehaann, though, there are forces working against the crown.

Also in Series: Knights of Sehaann

Reviews of The Pirate Prince: Knights of Sehaann, Book One by Leah Ross