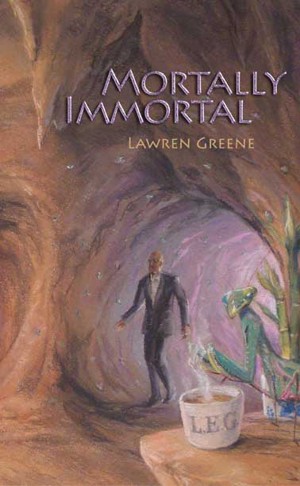 Lawren provides a humble and fresh perspective on life from an urban New Jersey setting dealing with socio-economic, political and gender based issues. With his expressive writing style, Lawren evokes the reader in such a way making them feel like they are right in the book. He gives the reader the opportunity to identify with their own personal situations from dealing with relationships to being stuck in traffic.

Intriguing the reader with real life scenarios he articulates a sense of indulgence in fantasy with cleverly drafted multi-dimensional characters and creative wordplay. Lawren actually revolutionizes ones’ thought processes throughout these 6 volumes consisting of his life; challenging the reader to think about their own purpose in life. He services the reader with topics that are plainly visible to the everyday person and ultimately may have some societal impact.
Lawren is a man that will open the world to a new realistic, well articulated, and open-hearted perception of life. Each volume will ultimately tell a story that will paint a cohesive picture, which will take the reader through thousands of emotional sensations.

Educationally and professionally, Lawren continues his rigorous self-paced advancement to get to a self- determined apex. Technology is his game and he prides himself on the many successful working relationships established throughout the years. Lawren is a very approachable man in person but can be deemed as highly elusive, much like the sand that slips from the hand. All you have to do is Google "Lawren Greene" and you will assuredly be welcomed into the fast paced and methodical mindset of this modern day literary mastermind. As a scholar, friend, and business man, Lawren has been defined as a premier artist ready to blaze the world with his transcendentalist style of emotionally impactful literature and will start by planting seeds in the ghetto, rural, city, suburbs and wherever else he sets his path. Ultimately, Lawren is about the general success of a multi-culturally accepted society where people are human beings whose rights must become more identifiable. Lawren as an emerging artist is powerful...absolutely a true “Green Diamond in the Sky” when it comes to his focus and ability to express his and society’s feelings throughout the ages.

You have subscribed to alerts for Lawren Greene.

You have been added to Lawren Greene's favorite list.

You can also sign-up to receive email notifications whenever Lawren Greene releases a new book.