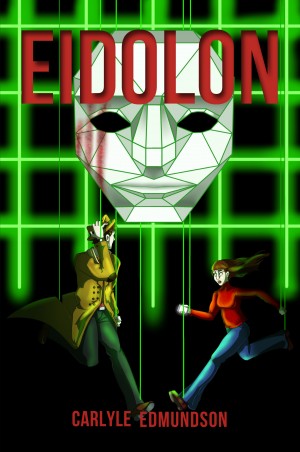 By Carlyle Edmundson
When P.I. Lance Canela's contact, Wyatt, is driven underground by the followers of the crusading hacker Eidolon, he figures it's karma. Until Wyatt calls in a favor—digging up dirt on his enemies. An unpleasant task, made worse when Lance is stuck working with a clickbait blogger in search of controversy. But as Lance gets to know what Eidolon stands for, he's less certain he's on the right side. More
Being a private detective means dealing with some unsavory characters, but Lance Canela picks his contacts carefully. So when his go-to hacker, Wyatt, winds up on the run, it seems like bad karma catching up to him. It only becomes Lance's business when Wyatt cashes in a favor--dig up dirt on the followers of the crusading hacker known only as Eidolon.

The task only gets worse as he finds himself working alongside a clickbait blogger named Becky, whose main concern is unveiling the next big controversy. But as the investigation continues and Lance learns more about Eidolon and what he stands for, he's less and less certain that he's on the right side of this conflict. Is Wyatt taking advantage of him to get out of a bind, or could there really be a dark secret at the heart of Eidolon's attempts to right the world?

A lifelong fan of science and science fiction, Carlyle Edmundson is a blogger and aspiring filmmaker from North Carolina. His first book, The Arcology, launched the Lance Canela series, which hits on modern social issues with a dystopian, cyberpunk style.

About the Series: Dystopian Detective

The adventures of a noir-obsessed private detective in the dystopian future city of Kindred. Can old-fashioned tactics triumph against dangerous hackers, megacorporations, and massive Arcologies, or will Lance have to embrace new ideas and revolutionary philosophies to aid the city's victims?

Reviews of Eidolon by Carlyle Edmundson

You have subscribed to alerts for Carlyle Edmundson.

You have been added to Carlyle Edmundson's favorite list.

You can also sign-up to receive email notifications whenever Carlyle Edmundson releases a new book.