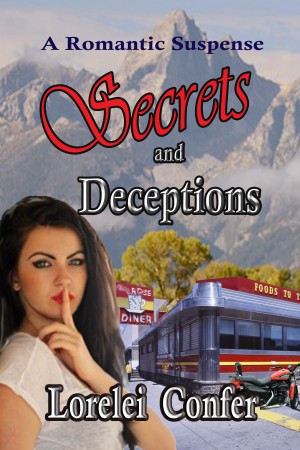 By Lorelei Confer
Rated 5.00/5 based on 1 review
When Dillon Davidson returns from a military stint of four long years, eighteen months of which were in captivity, and he has scars that run deep. He’s been gone too long and now his high school sweetheart, Avri Lawrence has a law degree, her own law firm, her own home, and another man. But she'd vowed to wait for him! Did she lie to him? Or are they both deceiving each other? More
When Avri Lawrence’s high school sweetheart leaves her to enlist in the military, she nurses a broken heart. When Dillon returns four years later, their attraction to each other is stronger than ever, but life’s experiences has changed them. When her life is threatened she’s not sure he’ll come to her rescue or like what he finds. She has secrets and she’s not ready to share.

Dillon Davidson wants to advance in his military career but didn’t plan on having to kill so many people to do so. On a Special Opps mission he’s captured and tortured for eighteen long months. After his escape, he ends his four-year career in deception. He wants to start over with his soul mate, Avri in Saddle Creek, Wyoming.

But are there too many years of separation, too many secrets, and too many memories between them for them to overcome?
Available ebook formats: epub mobi pdf lrf pdb txt html
First 10% Sample: lrf pdb Online Reader
Price: $1.99 USD
Buy Add to Library Give as a Gift
How gifting works
Create Widget
Tags: love military sex lies captured secret baby gone too long suspiscious
About Lorelei Confer

Amazon bestselling author of romantic suspense, Lorelei Confer, has been writing since the fourth grade. She lives on the Gulf Coast of Florida with her husband and AJ, a longhaired Chihuahua, who are both her constant companions.

In 2010, her first novel, Deadly Deception was published, the first in the Deadly series. Another series, Saddle Creek, began with the first release, Rustlers and Romance in 2016. This series is set in the shadows of the Grand Teton mountains in Jackson Hole, Wyoming.

Mentoring children years ago led to helping aspiring authors set goals, and generally, meet their objective to finish the book. She practices her own discipline every day.

After six years as a copy editor and two years as an editor at The Wild Rose Press, she ventured out on her own as an indie author.

Sign up for her newsletter at https://www.loreleiconfer.com/subscribe to receive exclusive excerpts and bonus material, receive alerts when books are released, and take part in great giveaways.

About the Series: Saddle Creek Series

Four young boys with different backgrounds meet in high school and become loyal trusting friends. After graduation they separate: one to college, one buys the horse ranch he was raised on, another joins the military and the last becomes sheriff of the small town set outside Jackson Hole, Wyoming, in the shadows of the Grant Teton mountain range. The series introduces each of them in their own books and takes you, the reader down the life's path through thick and thin, gains and losses, and how they overcome tragedies to find true love AND maintain their loyalty to each other.

Reviews of Secrets and Deceptions by Lorelei Confer

This story is the real deal when it comes to the saying "page turner"!
Secrets and deceptions is an excellent source of thrill and suspense! Lovers Avri and Dillon reunite after fours years of separation. Their love for one another is quickly rekindled, (Kind of like a slap in the face, really. The reunion, itself, was suspenseful and brought on several questions that would later be answered.) but at what cost? What's real? What's a lie? Do they even know each other, anymore?
Both have secrets they're keeping from one another, but neither can hold onto them for long. Eventually, the truth is gonna come out.
I thought the concept and play out of this story was very realistic. People have secrets and as time goes on, those secrets/happenings change people. I'm glad a writer explored the affects lies can have on a relationship, romantic or otherwise. It creates uncertainties, as well as misunderstandings.
It's clear Avri and Dillon still love each other deeply, so of course readers want these two darlings to open up and just spill the guts (oops. Spoiler?) already, but the suspense was well played!!
I honestly think this is the fastest I've ever read a novel of this length!
The pacing of this story teeters back and forth from nice, steady, slow builds to fast, adrenaline pumping scenes and developments. There's really a lot going on here what with the past/present plots (and fantasies/night terrors) of two characters on their own as well as together, but it's nicely explored. I never felt lost in the text.
This author does an excellent job of keeping the reader's attention on the book in hand! Because, really, ya gotta know if they're gonna make it!

You have subscribed to alerts for Lorelei Confer.

You have been added to Lorelei Confer's favorite list.

You can also sign-up to receive email notifications whenever Lorelei Confer releases a new book.