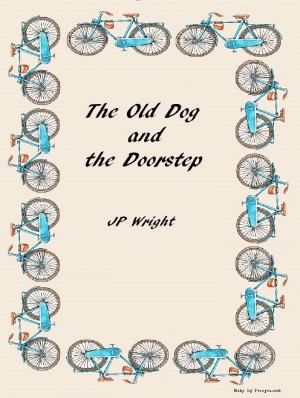 The Old Dog and the Doorstep

By JP Wright
Rated 4.67/5 based on 3 reviews
A short intermission entertainment, intermezzo, entre-acte, or lobby play to stop a gap while we await further full-length works from the Tickham girls. Concerning the diversions of village life and the merit of observing a sound aphorism. More
A free introduction to life in the village of Hapeney Fen, filling the space between 'Home Economics for Girls' and 'The Elasticated Waistband'. An unfortunate connection between Violet's slipper and a steaming sign of the old dog Marcus's passage, and finding an old bike in the shed, gives Mother a mysterious thoughtful look. Kitty is despatched to the Vicar's Invitational village baking contest, where the old bike will be auctioned. She does not solve the mystery, but she does eat a lot of cake.
Download: epub mobi (Kindle) pdf more Online Reader
lrf pdb txt
Price: Free! USD
Add to Library
Create Widget
Tags: baking kitty girl detective tabitha tickham
About JP Wright

JP Wright lives in the southwest of England. Between the demands of his day job, his duties as amanuensis to the Tickham girls, digging the allotment, cycling, running and spending time with his own beautiful girls, he sometimes writes for himself.

Reminded me of I Capture the Castle but not at the same level. Two sisters, worried about the family income and future. Not quite the same, though—no real romance, and Dad plays a very small part.

Told in first person by both girls, primarily the elder. At times difficult to figure out who is narrating, and the action isn't as smoothly described as it could be. Both are far advanced intellectually for their ages to the point that I couldn't quite believe in them.

Worth a read, though, and next book should be better.

This little gem was far too short to suit me, although in literary terms it was exactly the right length. But, having become addicted to this author with my first dose, I was hoping for a bigger hit. Still, what it lacks in length it more than makes up in quality, and in wit, subtlety, and skill. I shan't say more lest I give away a spoiler, but if you don't read this you are denying yourself a great pleasure.

I enjoyed reading it.
It has some humour among this book which makes me laugh.
Moreover, the description of the scene is beautiful.
Worth having a read.
Strong recommend!!!

You have subscribed to alerts for JP Wright.

You have been added to JP Wright's favorite list.

You can also sign-up to receive email notifications whenever JP Wright releases a new book.