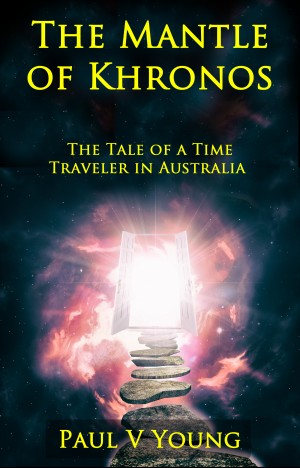 The Mantle of Khronos

By Paul Vernon Young
Mystery surrounds the discovery of artefacts embedded in rock at an ancient site on Australia's east coast, with the simultaneous arrival of several suspicious strangers. A series of coincidences connect diverse participants who suddenly find themselves in danger. Are any of the oddly behaved characters really from another time and is a dimensional portal about to open up? More
The appearance of man-made objects embedded in twenty-three million year old rock draws a motley group of colourful characters to the scenic and fascinating Caldera region of Northern New South Wales. The story is narrated by Romy, who visits the area for a week at the invitation of his cousin, Hunter, a local who believes the artefacts are evidence of time-travel. They seek advice from their friend, Jade, and her university professor, who have simultaneously made astonishing discoveries of their own.

Romy remains sceptical, even in the face of an ongoing series of inexplicable events, but finds himself drawn sympathetically into helping the eccentric Ajax, who claims to be marooned from his own far-off time zone. Jade has befriended a group of Aboriginal healers and, when one of them falls ill after coming into contact with a mysterious fluid, they draw the conclusion that it is a foreign substance from the future. Jade’s aunt, a fortune-teller from the Gold Coast who takes the paranormal in her stride, gets reacquainted with a family of Gypsies who have set up camp at the gates of Hunter’s property. Their little daughter is intelligent but prone to strange behaviour after entering trances.

The activities of a cult, whose leaders have turned a nearby farm into an experimental institute, attract the scrutiny of the intelligence agency ASIO and soon the once peaceful community is a hotbed of intrigue as opposing groups go undercover to protect their own interests. When Hunter considers the safety of his friends to be at risk from certain adversaries, he calls on support from a gang of bikers from Byron Bay, who agree to provide security until the threat subsides.

A common thread links the diverse groups: evidence supporting the existence of a living force field permeating the world, known as the Mantle of Khronos. Ajax adds to the concept by revealing what he claims are ancient secrets, but his credibility rests on the fulfilment of an event forecast to occur at the end of the week. In spite of accusations that his cousin is disloyal, Romy acts decisively to protect his companions, including the self-professed time traveller, until the story reaches its unpredictable conclusion.
Available ebook formats: epub mobi pdf lrf pdb txt html
First 20% Sample: epub mobi (Kindle) lrf more Online Reader
pdb
Price: $4.99 USD
Buy Add to Library Give as a Gift
How gifting works
Create Widget
Tags: time travel other dimensions australian adventure australian science fiction strange beings ancient site mystery and science fiction hippy cult intelligence agency intrigue interdimensional time portal
About Paul Vernon Young

ABOUT THE AUTHOR
Paul Young was born in Melbourne, Australia, on the 17th March 1953. After leaving school he spent a couple of years in the opal fields of Lightning Ridge in New South Wales, before moving his home base to Brisbane, Queensland.
His upbringing and education were along traditional Christian lines, yet from an early age he was drawn to mysticism and Eastern religions. Initially this tendency manifested in his choice of reading materials and the poetry he wrote himself; increasingly it has become a focal point in practical life. Paul belongs to the Rosicrucian Fraternity known as AMORC and holds a number of qualifications:
• Certified as a level III Reiki practitioner (2002)
• Certificate IV in Palliative Care and Conscious Dying (2003)
• Diploma of the Writing School Australia (2003)
• Certified TEFL English Teacher (2008)
• Certified Law of Attraction Practitioner (2014)
• Certified NLP Practitioner (2014)
Paul&#39;s first book, The Sign of The Quatrefoil, was written without any formal training, but at the end of 2003 he obtained his Diploma from The Writing School of Sydney, with the intention of producing further books and magazine articles. In 2004 he self-published a novel titled ‘The Griffin in the Valley.’
A career in international trade and shipping has given him the opportunity to travel to many places in the world, and he has spent some years living and working in Taiwan, Hong Kong, the Philippines and Thailand. These days he is easing into retirement from the corporate world and concentrating on his investigations into the paranormal and esoteric writings, with a particular emphasis on the relationship between humankind and the Sun.

Reviews of The Mantle of Khronos by Paul Vernon Young

You have subscribed to alerts for Paul Vernon Young.

You have been added to Paul Vernon Young's favorite list.

You can also sign-up to receive email notifications whenever Paul Vernon Young releases a new book.