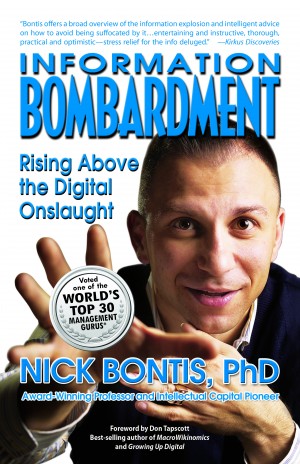 By Nick Bontis
It's Time to Work Smarter, Not Harder!

Information Bombardment provides proven, real-world solutions for proactively managing the onslaught of information we face each day both in and out of the office.

Dr. Nick Bontis weaves humor and personal stories with industry best practices and uses a simple framework of multilevel analysis to transform you to higher levels of productivity. More
It's Time to Work Smarter, Not Harder!

* Improve your ability to sort through all of the e-mails, tweets, posts, instant messages, Web sites and other digital items that overload you

* De-stress your life so that you can eliminate information-induced pressure, stress, anxiety, fear and other health-related problems

* Speed up innovation through increased collaboration among your team members, colleagues and other stakeholders

Information Bombardment provides proven, real-world solutions for proactively managing the onslaught of information we face each day both in and out of the office.

Dr. Nick Bontis weaves humor and personal stories with industry best practices and uses a simple framework of multilevel analysis to show you how to transform this real threat to productivity into an inimitable and sustainable competitive advantage for you and your organization. By teaching you how to work smarter, not harder, Dr. Bontis essentially gives you back your time. It s nothing short of amazing.

About the Author
Dr. Nick Bontis is a world-class keynote speaker, a leading academic researcher, an internationally sought-after management consultant, a popular TV and radio personality and an award-winning, tenured professor of strategic management at the DeGroote School of Business, McMaster University. He is one of the world s most cited authors and a leading expert in the fields of intellectual capital and knowledge management. Having amassed over a dozen prestigious teaching and research awards, he was recently recognized as a 3M national teaching fellow, an exclusive honor bestowed only upon the top professors in the country.

Dr. Nick Bontis is the world’s leading expert on intellectual capital and its impact on performance and is ranked among the top 30 management gurus world-wide.

He helps organizations leverage their most important intangible asset for sustainable competitive advantage. Nick has been immersed in the field since 1991 when a cover story in Fortune magazine, titled “Brainpower”, changed the course of his life. Risking a secure future, Nick left a promising banking career to pursue a PhD in the field. His ground-breaking doctoral dissertation went on to become the #1 selling thesis in Canada. At a relatively young age, his accomplishments thus far could fill a volume.

As a professional speaker, Nick has delivered keynote presentations on every continent for leading organizations in both the private and the public sector. His dynamic, high energy presentations provide personal and team recommendations for improving individual and organizational effectiveness leaving audiences with the tools, inspiration and impetus to accelerate performance. His customized programs are a mix of practical managerial tools, rigorous academic research, strategic consulting, entertaining humour and a blast of youthful exuberance.

As an academic, “Nicky B” (as he is known by his students) is an award-winning tenured professor who delivers enlightening content with energy that virtually zings off the walls when he steps into a room. He currently teaches business strategy to undergraduates, knowledge management to MBAs, and advanced statistics to PhD students at the DeGroote School of Business, McMaster University. He has won over 12 major teaching awards and the faculty researcher of the year twice. Maclean’s magazine has rated him as one of McMaster’s most popular professors for six years in a row! TVO recognized him as one of the top 10 lecturers in Ontario. OUSA and OCUFA awarded him Ontario’s top professor. He is also a 3M National Teaching Fellow, an exclusive honour only bestowed upon the top university professors in the country!

Nick earned his PhD from the prestigious Ivey Business School, U. of Western Ontario where he received the top scholastic achievement award. He also won a Canadian silver medal in the running long jump, with a remarkable leap of seven and half metres – that’s nearly 25 feet! Nick also competed on the UWO varsity men’s soccer team receiving both MVP and leading goal scorer honours. As an athlete, Nick received national all-star status and several high-profile awards all while performing in the UWO symphony band as a euphonium player.

As a consultant, Dr. Bontis is the Director of the Institute for Intellectual Capital Research – a leading strategic management consulting firm. His services have been sought after by leading organizations such as the United Nations, Microsoft, Health Canada, Royal Bank, Telus, Accenture, Enmax, Manulife, Mitsubishi, United Way the US Navy and IBM. Tom Stewart, former Editor of the Harvard Business Review and Fortune Magazine recognizes him as a “pioneer and one of the world’s real intellectual capital experts”. Nick is also on the Advisory Board of several organizations including a variety of educational-based institutions designing and implementing executive development programs across the country.

As a writer, Nick is Associate Editor of the Journal of Intellectual Capital, and has won international acclaim for his leading edge research papers, books and management cases. He is ranked as one of the most cited authors on intellectual capital in the world. As an entrepreneur, Nick is Chief Knowledge Officer of Knexa Solutions – the world’s first knowledge exchange and auction software solutions company, based in Vancouver. Dr. Bontis also draws on his wealth of practical, hands-on business experience. He started his career at Human Resources Development Canada and later at KPMG. He then moved on to work for several years at CIBC Securities Inc. in a variety of areas including marketing, securities analysis, recruitment, strategy and software development. He received the CIBC Chairman’s Award for outstanding contribution to the bank.

With his unique combination of substance and sizzle, Nick is guaranteed to ignite, entertain and enlighten audiences, empowering them with both the tools and the inspiration to perform at a higher level of accelerated performance. He currently resides in Ancaster, Ontario with his wife Stacy and their three young children Charlie, Dino and Tia Maria.

Reviews of Information Bombardment: Rising Above the Digital Onslaught by Nick Bontis

You have subscribed to alerts for Nick Bontis.

You have been added to Nick Bontis's favorite list.

You can also sign-up to receive email notifications whenever Nick Bontis releases a new book.