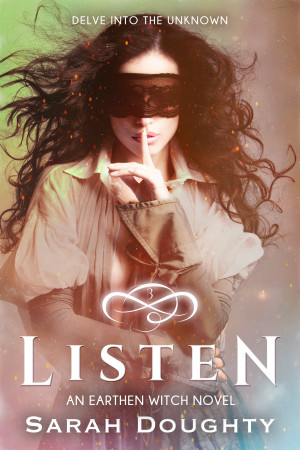 Battling against things she cannot fight isn't something Earthen witch Aisling Green is used to, but she must act quickly and outsmart the one that wants her dead and save the lives of her friends before it's too late.

As they follow the trail, they rescue a most unlikely person, and uncover a deeper, more sinister plot. With the lives of the two vampires on the line, they must fight for their lives, try to rescue their friends, and stop the evil plans. In the face of so much danger and uncertainty, they are forced to go to war and make a discovery that will change everything. The question then becomes at what price will they be forced to pay to survive?
Download: epub mobi (Kindle) pdf more Online Reader
lrf pdb txt
Price: Free! USD
Add to Library
Create Widget
Tags: romance urban fantasy thriller mystery paranormal romance paranormal action adventure fantasy romance adult fiction strong female lead
About Sarah Doughty

The night calls to me in moonlit whispers and my daydreams answer.

Conjuring words from the ether is like breathing — my weapon — my therapy. It allows me to weed through all the pain, in an effort to find myself again.

My name is Sarah Doughty and I suffer from complex PTSD, depression, and debilitating anxiety. And if I don’t have a migraine, I have a headache. Every. Single. Day. Though I am terrified of the night, crowds, and much more, this darkness has become my home.

If writing is my breath, then my books are my life. While my poetry focuses on singular events meant to evoke feeling or spur memories, fiction is where my heart lies. Though my books are a way for me to escape my mind and experience a magical world, deep down the problems are very real. And in many ways, my characters are vivid and alive, which in turn helps me see the world in a better light.

I've shared them online for anyone who wants to read them — for free, to offer someone else hope, or the same, temporary escape as they did for me.

About the Series: Earthen Witch

Over three hundred years after their extinction and the collapse of the supernatural world, Aisling Green finds herself as the only Earthen witch in existence. With Connor by her side and a growing list of allies following her lead, she must learn to utilize the power she possesses, save the supernatural world and reunite it, protect the ones she loves, and defeat all that want her destroyed.

About the Series: Earthen Witch Universe

After their extinction and the collapse of the supernatural world, Aisling Green finds herself as the first Earthen witch in over three hundred years. With the help of Connor, a powerful light witch as her guide, Aisling is tasked with restoring peace and unity to their world. Aisling, Connor, and her growing list of allies -- some of which have journeys of their own along the way, told from their own perspectives -- must learn to adapt to the ever-changing threats standing against them. There’s a long road ahead for them all, but they’re determined to defeat the ones hell-bent on continuing the strife and chaos.

Reviews of Listen by Sarah Doughty

This book/series is amazing! But why can't I find the next book? Was it never written or is there an expected publishing date?

"Where the hell is Liam?” I asked for the third time. “I haven’t seen him since Sunday.” It was Wednesday.

When vampires Liam and Jon go missing, it's up to Aisling Green and her friends to find them, but finding them and surviving what awaits won't be easy.

"We were at war. The supernatural world was in a constant battle against opposition. But the enemy was never the same.... The war itself boiled down to the right to live. Some believed that we didn’t have that right. That we -- others -- should die. Some were after power and would kill anything that stood in their way. Or, some preferred to kill and take power."

Once again, Author Sarah Doughty delivers a heart stopping tale of excitement and suspense as Aisling Green and her friends continue in their fight to protect themselves and their world. Fasten your seatbelt as Sarah takes you on another journey where new meets old and where Aisling and her friends go on a race against time to save their friends and themselves.

For those of you who haven't read the previous books from Sarah, don't hesitate to jump right into this one!
For those who had the privilege of reading the previous ones, you will not be disappointed as this holds surprises and more of Sarah's beautiful and exciting story-telling.

You have subscribed to Smashwords Alerts new release notifications for Sarah Doughty.

You have been added to Sarah Doughty's favorite list.

You can also sign-up to receive email notifications whenever Sarah Doughty releases a new book.