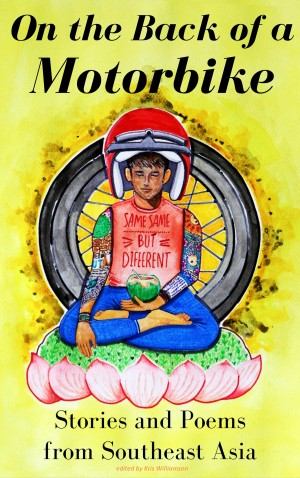 On the Back of a Motorbike: Stories and Poems from Southeast Asia

By Kris Williamson
The anthology presents 27 works of short fiction, creative nonfiction and poetry on the theme of the motorbike in Indonesia, Malaysia, Singapore, Thailand, Laos, Cambodia, Vietnam and the Philippines. The authors range from regional connoisseurs and expats to locals and those in the Diaspora, allowing for readers to approach SE Asia from different angles and tour as if on the back of a motorbike. More
Southeast Asia represents many things to different people. From the offshore banking and tourist island paradises to the mountain towns of Borneo and fishing villages along the Mekong, it is difficult to summarize such a diverse region. Anyone who has spent at least 5 minutes in any of these countries, though, can vouch for the prominence of the motorbike.

Floridian Kris Williamson has lived in Kuala Lumpur since 2005, where he serves as director of Literary Concept publishing house and consultancy. He studied music and anthropology before focusing his research interests on Southeast Asia. 'Son Complex' (2013), his first novel (and later radio play), is presented in the form of a character profile and series of sarcastic observations on urban life in Malaysia from the view of an outsider. The following year, he edited the anthology 'KL Noir: Yellow', which was nominated for a national reader's choice award and had several of the stories adapted into short or feature-length films.

With a preference for writing short fiction, he has published stories in a number of anthologies in English and Malay. His work centers on contemporary urban life, and he has published across genres and styles, including satire, noir, parody, romance, cyberpunk, and even poetry and travel narratives. Consistent in his pursuit of an inconsistent reading audience, though, he has also published in periodicals and journals ranging from 'Esquire' to the 'Historical Journal of Film, Radio, and Television'. Additionally, he has edited the Southeast-Asian-themed quarterly literary journal 'Anak Sastra' since 2010.

Reviews of On the Back of a Motorbike: Stories and Poems from Southeast Asia by Kris Williamson

You have subscribed to alerts for Kris Williamson.

You have been added to Kris Williamson's favorite list.

You can also sign-up to receive email notifications whenever Kris Williamson releases a new book.