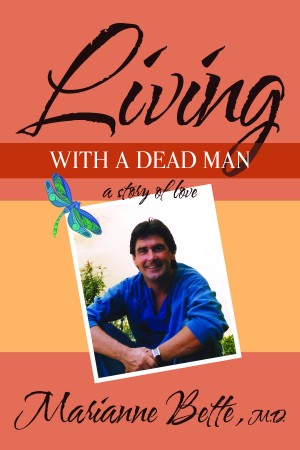 Living with a Dead Man: A Story of Love

It didn’t matter that Marianne was a family practitioner, or that her husband, Thom, was a death and dying therapist. Cancer, and all that went with it, had found them.

This story shares their journey as they faced the most difficult challenge of their life together, and the beauty they discovered along the way in family, friends and living.

She went to Loyola University in Chicago, and attended medical school at the University of Southern California in Los Angeles. For 18 years she lived and worked in the “high desert” of Palmdale and Lancaster, CA, before moving back to Southbury 17 years ago.
Marianne has three daughters that she’s very proud of.

The oldest, her step-daughter Sarah, lives in California with her three children and her husband, who is a chef.
Her daughter, Caitlin, is in her last year of UConn medical school and is going into Family Practice.
Justine, the youngest, is in her third year of college at Warren Wilson College in Asheville, NC, and is studying to become an equine-facilitated psychotherapist.

While Marianne never anticipated becoming an author, as many writers know, sometimes there’s a story that just won’t let you go until it’s written. When Marianne’s husband, Thom, asked her to write this book, she never thought she would. Twelve years later, it is finally seeing the light of day.

Her hope is that, in reading it, you reconnect to the people and ideals that are most important to you in living a fulfilling life.

You have subscribed to alerts for Marianne Bette, M.D..

You have been added to Marianne Bette, M.D.'s favorite list.

You can also sign-up to receive email notifications whenever Marianne Bette, M.D. releases a new book.