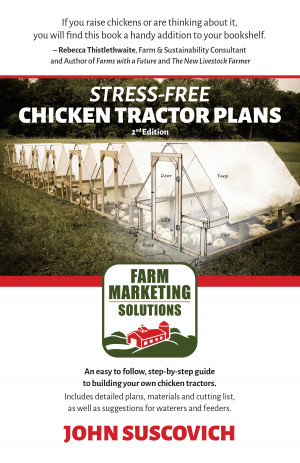 Raising chickens on grass provides them with a healthy lifestyle and a delicious flavor. You can raise just enough of them to feed your family or scale up to include pastured poultry as a profitable part of your farm business. John Suscovich has raised thousands of chickens using these mobile shelters, a main enterprise on his farm in Connecticut.

These chicken tractors were created using the best elements from other designs. They are easy to move and provide a good life for the chickens. With a little bit of creativity, they can also be modified for seasonal egg-layer housing, rabbits, ducks and forts for your kids.

Not only does this book contain the plans and supply list to build your first chicken tractor, but it gives you some insight into how to use it and what mindset you should have if you are to become a happy and successful farmer.

John also walks you through the light carpentry skills you need to build these chicken tractors and teaches you the most commonly used knots on a farm. You may learn these skills for this project, but you’ll be able to apply them on your farm for years to come.

John Suscovich lives and works on a 52-acre farm in Western Connecticut. His main operation has always been pastured broilers, however, through the years he has expanded to pigs, sheep, hops, apples, herbs and vegetables. His farm, Camps Road Farm, is one part of a three-part business that includes Kent Falls Brewing Co., a farm brewery on property, and Neversink Spirits, a craft distillery off property.

Since getting into farming, John has raised as few as 40 broilers and as many as 2,400 broilers in one season. No matter what else he ends up growing on his farm, chickens always seem to maintain a special place in his heart. They’re enjoyable to raise, his community loves them, and they’re a vital part of the success of his farm.

His life has taken a lot of interesting turns. He grew up in Connecticut and went to college at the University of Connecticut as a technical theater major. After school, he moved to New York City where he worked for four years in scenic and lighting design, primarily for television.

After getting sick of city life, John and his wife, Kate, decided to ride their bicycles 5,500 miles across the United States visiting farms and craft breweries along the way. After a year of purposeful homelessness, they landed back in CT to apprentice on a farm for a season and eventually start their own broiler operation.
Somewhere along the way, John started Farm Marketing Solutions, his multimedia publishing company, with the goal of educating and inspiring the next generation of farmers. Drawing from his media background, he wanted to share his story with others in the hopes that more people will decide to homestead or choose farming as a career.

John loves what he does every day. He has found pleasure and fulfillment in farming that he hadn’t thought possible to achieve in the working world. On a regular basis, he gets to create life and then share that experience with others. He grows food that is not only good for people, but good for the planet. And he thinks that’s friggin’ great!

His hope with his book is that you come to find the same joy as he has in purposeful food. Chickens were meant to live on grass, not in barns. With every chicken tractor book sold, we’re one step closer to a society that appreciates chickens as much as he does.

You have subscribed to alerts for John Suscovich.

You have been added to John Suscovich's favorite list.

You can also sign-up to receive email notifications whenever John Suscovich releases a new book.