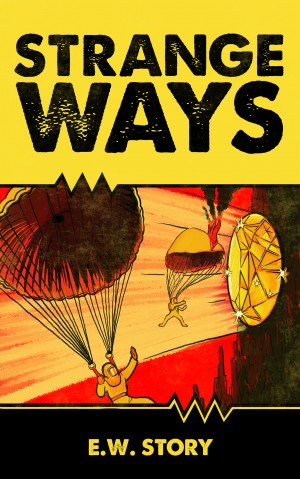 By E.W. Story
A lover lost, a world destroyed . . . Time in tangles and our fate in the balance . . . A fugitive’s flight through a maze as deadly as the creature at its heart . . . Humanity’s last hopes bicker on the brink of extinction.

Four stories on the road to cosmic weirdness.

The initials in the name “E. W. Story” stand for “Edward William”. He might also be called “Ed”. Ed was possibly born in Cleve, South Australia, and raised in Adelaide, where he may have studied Civil Engineering. Some propose that he lived in Perth and Darwin as well. It’s not beyond the realm of chance that he has a wife (Liz), two children (Luke and Sarah-Jane), and a dog (Darth). He definitely sold a story called “Cold Sleep, Cold Dreams” that was published in the landmark 1994 Australian science fiction anthology Alien Shores. He is also, almost certainly, the author of “On the Blink”, a story that rated third in a readers’ poll of the Canberra SF Society in 1992. That story appeared under the name “Bradley MacMillan”. He published a lot more stories under a third name when he grew up. (Which is the pseudonym? You decide.)

About the Series: The E.W. Story Pulp Series

You have subscribed to alerts for E.W. Story.

You have been added to E.W. Story's favorite list.

You can also sign-up to receive email notifications whenever E.W. Story releases a new book.