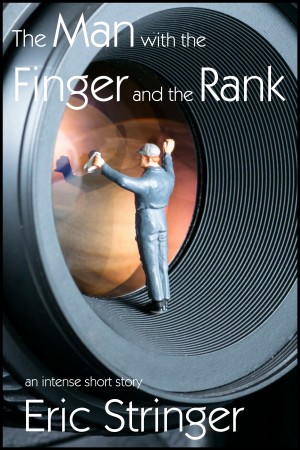 The Man with the Finger and the Rank

By Eric Stringer
Mr. Kristen dreams of world domination. Finally his chance comes. He finds himself in a launch bunker with the red button before him. Yes, that red button. And what he launches will not soon be forgotten.

First 20% Sample: epub mobi (Kindle) lrf more Online Reader
pdb
Price: $2.99
$1.20 USD
Buy with coupon Use the code AGB60 at checkout for 60% off during our site-wide promotion!
(Offer good through May 31, 2020 )
Have a better coupon?
Add to cart, then apply your coupon
Add to Library Give as a Gift
How gifting works
Create Widget
Tags: horror short story terror war nuclear weapons missiles icbms attrition
About Eric Stringer

Eric Stringer (the borderline psychotic persona of Harvey Stanbrough) is a miserably failed newspaper reporter whose father was obsessed with one soft spot after another and whose mother didn’t love him enough to care that she didn’t love him enough. She swapped him to a camel jocky she met along the border in southern California for a hit off his crack pipe and a swing on his banana hammock.

Eric was born in poverty and clawed his way up to debauchery and tearing the wings off young maidens. Once he got out of prison for failing to vote multiple times in an election (he lived in Chicago at the time, and the law’s the law) he began to write stories about all the strange and unusual things he saw. Some of them were actually there.

You have subscribed to alerts for Eric Stringer.

You have been added to Eric Stringer's favorite list.

You can also sign-up to receive email notifications whenever Eric Stringer releases a new book.