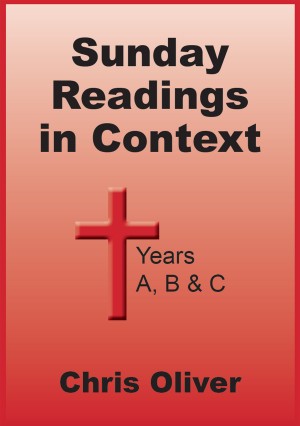 Sunday Readings in Context - Years A, B & C

I am married with four grown children and seven grandchildren. We have moved around several parishes in England - a good way to explore this lovely country.

I have been involved in contributing to and leading Bible Groups for over 20 years, and the more I read the more fascinating the Bible becomes.

For these groups I found a digest of thoughts from many different commentaries prompted interesting discussions.

"Sunday Readings in Context" started in 2013 when I realised I knew nothing about the first readings from the Old Testament, and often received little help towards making sense of them from the priest's homily. Few priests studied the Old Testament before ordination. So I started contributing a short note to our parish newsletter - and it has grown ever since.

Gradually the notes were consolidated into ebooks. Six altogether, appearing every 6 months. These were later combined into one ebook covering the full three year cycle.

Before each Sunday I revise the note for the coming Sunday, now including a comment on the psalm, for inclusion in several church newsletters. The ebooks are revised from time to time, becoming available to earlier buyers.

I hope you find them helpful. Comments welcome!

You have subscribed to alerts for Chris Oliver.

You have been added to Chris Oliver's favorite list.

You can also sign-up to receive email notifications whenever Chris Oliver releases a new book.