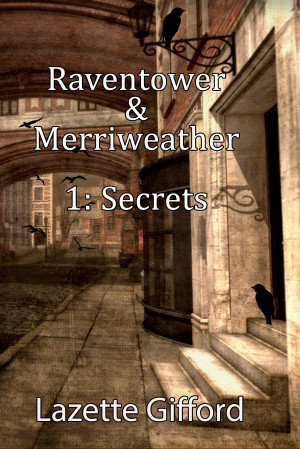 Trouble is brewing for the city of Kamere. Atrian warships stand off the coast, and there are enemies even within the ranks of the nobility itself. Merriweather and the eccentric young lord will have quite a job keeping him alive as well as hiding his more unusual secrets. She soon learns there may be very good reasons for the Atrians to want Lord Raventower dead.
Available ebook formats: epub mobi pdf lrf pdb txt html
First 20% Sample: epub mobi (Kindle) lrf more Online Reader
pdb
Price: $3.99 USD
Buy Add to Library Give as a Gift
How gifting works
Create Widget
Tags: adventure fantasy magic gods war airships clockwork
About Lazette Gifford

About the Series: Raventower & Merriweather

Lord Raventower doesn't know what to expect when Captain Merriweather is assigned to protect him, and she certainly never expected the adventure as she tries to keep the eccentric young lord alive.

I thoroughly enjoyed both this book and the two that followed. I originally got it because I enjoy steampunk and this looked like an interesting twist - set in more of a medieval-style world with magic, instead of just another Victorian-era novel. While the setting and story line lived up to my expectations, it was Mica and Merriweather who really caught my fancy. Mica, the highly intelligent but reclusive inventor, would, today, be on the autistic spectrum - difficulty relating to other people, easily overwhelmed by outside stimuli, and somewhat obsessive about his clockwork creations and his routine. Watching him learning to cope after being thrown into the midst of political turmoil, assassination plots, and foreign invasion is wonderful. Merriweather is the perfect companion. An unwilling guardian at first, it doesn't take her long to be attracted to the eccentric but kind-hearted and generous Mica. I thought the love story was sweeter for being understated.

Disclosure notice: I know this author as an online friend.

The first time I read this book, it was over a number of months from December 2018, I think, through maybe February of the following year, mostly due to life events interrupting my reading. At the time when I finished it, I was unable to write a review. Upon my decision to write a review, I realized my memories of this book had blurred into the events of book 2, which I more recently finished, and decided to completely reread book 1 to clarify things for myself, and managed to finish the book within a few days.

It proved just as compelling and riveting as I found it whenever I had an opportunity to pick it up the first time I read it.

Mica's eccentric obsession with clockworks resides at the center of this book. He has no real idea how he came to have this ability, and presumes it descends from his mother's side of the family due to the fact her line has been known to produce the odd Gifted person in generations past. Regardless, this enables him to work with a magical metal that comes from the sea to create clockworks which, so long as their gears and springs remain unbroken, perpetually work.

Gifford creates a finely-crafted and detailed world for Micalis Raventower and his story. Her adeptness with description paints vivid scenes without superflous words, and the characters inhabit it without any incongruity. She also develops the various relationships Mica has and shapes with his elder brother and sister, and Merriweather deftness, and shows Mica growing from a reclusive inventor into a man engaged with his world and the people who inhabit it—those not only within his home, but also outside of it.

As Mica's horizons broaden, so does the plot, which follows Mica as he learns about his father while seeking information to aid his country in the young invasion of a longtime enemy's force. Nobody Mica knows can figure out why the Atrians are interested in him, but it's clear the invaders have a marked interest in him, and they pursue him even to their deaths in mountain ravines as he searches for answers to the secrets his father left behind.

One of the things I especially enjoyed in this book was the political intrigue, which sets off in the first chapter. There are several levels to this—not just Mica's status as a Lord of Sedina and his relation to a general. Merriweather's presence also brings some intrigue. And then there's the war, with the Atrians and the traitor who brought them to the capitol city of Sedina. One of the things Zette does so well in this book is tie all the little intrigues into a detailed whole that adds depth and complexity not only to the book, but also the world she's created in it and the society that gives that world its structure.

The book has a definite open ending, without leaving it a cliffhanger. It ties nearly everything up quite neatly, while leaving plenty of questions to be answered in book two.

(reviewed 3 years after purchase)
Amy Keeley reviewed on Nov. 20, 2016
(no rating)
(Disclosure: I received a free copy of this book for review purposes.)

I really wanted to like this book. Like, a lot. And there's a lot of good things in this book, so I thought for sure by the time I got halfway through that I would end up liking it.

I mean, it has great characters in the form of Lord Micalus Raventower, a reclusive yet kind aristocrat who does his best to help the more unfortunate members of the city as well as create the most amazing clockwork creatures and devices, and his bodyguard, Merriweather, a woman devoted to her assignment and her career who ends up helping Raventower in many, sometimes off-beat, ways.

Together, they try to solve the mystery of who might want Raventower dead, and why. With enemy ships in the harbor, a livid sister who feels she should be in charge of Raventower's estate, and a fellow aristocrat with a judge, there seem to be quite a few. Throw in a high-probability of romance, a few fantastic twists in the plot regarding Raventower's mysterious ability with clockwork and the nature of the devices themselves, and it sounds like something a fan of steampunk would love. (Further disclosure: I've kept meaning to read some steampunk...this is the first novel I've read in that genre. Just so you know.)

However, here are the things that didn't work for me.

First, there's a lot of speculation, which can be very entertaining. It can. But it felt sometime as if the speculation kept going around in circles with no real progression within the scene.

In line with that, the action is very similar to life: gas and break. There are long scenes where nothing seemed to be happening, and then suddenly I'm reading scenes where the action doesn't stop. Until it does. That got old after a while.

(Ironically, part of what got to me was just how much plot was stuffed into this novel. Nothing felt as if it naturally unfolded from one scene to the next with just enough breathing room to take in the changes. The setting changed several times and in the last half of the novel it felt, for whatever reason, like there was too much ground being covered physically and not enough time to breathe. Like the characters had to hurry to one location, where very little happened, and then they had to hurry back, with nothing of any real import happening during the journey. My experience could be wrong, but that's how I remember it.)

The romance I kept hoping for never really happened. I mean, there's some nice dialogue, but nothing that really made me go "Ooooh!" except for Raventower's occasional reactions to Merriweather. I'm not sure why that was the case. Mairelon the Magician and Magician's Ward had a very sweet romance that was also reserved in the way it was presented, and yet I was very involved in that romance.

The lack of emotions and emotional reactions, in fact, was one of the things that started to disengage me from the story. Maybe that ties into the gas/break nature of the plot. I don't know. I do know that by the time I got three-quarters of the way through, I was skimming. Not even the final revelations at the end interested me, though I have to admit I really enjoyed a scene with Raventower in the ocean, a scene that not only explained where sea metal came from but had Raventower trying to make it to safety in the middle of a battlefield in spite of his own personal obstacles. It was a very engaging scene and I loved it.

The ending, as a result, didn't interest me. The romance never materialized as I'd hoped. The revelations of the secrets, including finding out what Raventower's father had done, felt lackluster. Although I might pick up the second book when I get the chance, just to see if the romance develops into a real connection, I'm not enthusiastic about it.

Again, I really wanted to like this. I'm sorry.

Good characterizations and dialog. Interesting alternate universe mashup between steampunk and magic. Fast moving story line. Looking forward to the next book in the series.

You have subscribed to alerts for Lazette Gifford.