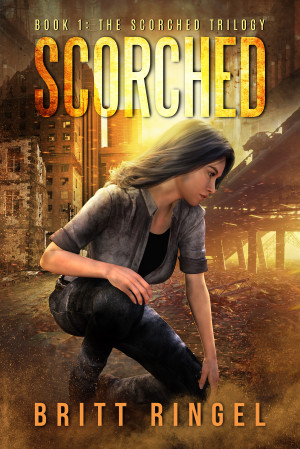 By Britt Ringel
Rated 3.67/5 based on 3 reviews
A young woman wakes up among the trash in a fetid alley. The side of her head is burned and red. In the darkness, the chirp of a security aircar and cries of a bloodthirsty mob ignite a single instinct inside her: Run. Scorched, a thriller set in a dystopian future, follows the mystery of one woman’s struggle to regain her identity and discover the reason why a powerful force wants her dead. More
A fetid alley, roving security aircar and bloodthirsty mob, it’s just another night in the slums of Shantytown. This town feeds on the weak.

A muddy medical gown, festering wound and no memory of who she is or how she got there, Kat staggers from that alley and into her new life as a Trodden. She might be vulnerable but she’s certainly no victim.

A hopeless Rat, disgraced doctor and handsome citizen, Kat’s friends might help her but what will be the cost? Something hunts Kat, looking to finish what began the night she lost her memories. If she wants any chance to save her friends and herself, she’ll learn exactly who she was and what she can do.

Britt Ringel has been a windsurfing instructor, Air Force captain, attorney, and teacher, but his passion is building galaxies and the characters who inhabit them. When not writing, or reading, he enjoys military documentaries, building model ships, and spoiling his golden retriever, Jengo.

About the Series: The Scorched Trilogy

Pre-Cat was the most important operative in the mysterious Pelletier's Society. Desperate to start over, she scorched her memories and fled to the slums outside Waytown. All she wanted was an escape but her former keepers couldn’t let her go. A suspense thriller set in a dystopian future, The Scorched Trilogy follows one woman’s struggle to regain her identity and discover the reason why a powerful force wants her dead.

Also in Series: The Scorched Trilogy

Reviews of Scorched by Britt Ringel

I really liked the way this story began. I was drawn into the main character's struggle to survive on the streets with nothing, and to slowly better her life when the opportunity presents. After she gets a job, the pace picks up. Her life seems to be getting better, and she starts to develop a relationship with her boss, but at the same time, people she doesn't recognize are looking for her, and they aren't friendly. It all happens too fast. In order for the ending to be believable, you have to buy that the person the main character has become closest to would be willing to give up everything to help her, even at risk of his own life, but they actually haven't known each other for very long, and had only started getting to know each other on a personal level. It all ends with the revelation of who the main character is and how she found herself in this situation, which is fairly unimaginative and spelled out for us by her opponent in such detail that there isn't much sense of mystery left. I may or may not read the next book in the series at some point.

(reviewed 47 days after purchase)
Robert Wingfield reviewed on May 15, 2021

An intriguing book, well written and edited. The story kept me hooked all the way from where Missy wakes, barely clothed in an alley in a dystopian future and gradually starts to assert herself in the dangerous underbelly of the new society, to the point where she starts to realise who she is and take control of her life.
The world she discovers is described vividly, and you become part of it, sharing in the bewilderment of the heroine who has lost her memory and is struggling to recover from a mysterious wound - not easy in the filth of the environment she is exploring.
She eventually starts to make headway, and things improve when she remembers her name is Kat, as part of her memory returns. She also discovers she has certain mental powers, which subconsciously get her out of an uncomfortable situation, and give her a way forward.
This would have been a solid 5 star review, but for the ending. The last chapter did explain a load of the questions in my head, but it was as though the author needed to rush everything through at that point in a confusing battle scene that didn't do the previous fight incidents any justice. The book should have been longer to tease out the conclusion, and shorter, removing some of the incidents at the mine, say, which are there to demonstrate Kat's newly discovered powers.
Would I recommend it? Most certainly, but the ending spoiled it a bit for me.

(reviewed 22 days after purchase)
Nahdee reviewed on March 28, 2021
(no rating)
Good book. Like the main character

You have subscribed to Smashwords Alerts new release notifications for Britt Ringel.

You have been added to Britt Ringel's favorite list.

You can also sign-up to receive email notifications whenever Britt Ringel releases a new book.