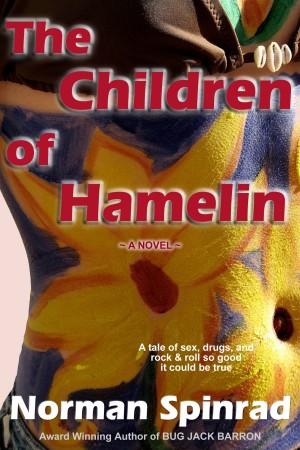 The Children of Hamelin

It's fiction... but with a twist... it's autobiographical! A must read for all Spinrad fans.

Meet Tom Hollander, an ex-junkie who earns his living as a fee reader at a literary agency—"the big game," as he refers to it. The hook is that Tom's best friends, Ted and Doris, are heavily into therapy and something called The Foundation for Total Consciousness, which Tom, ever manifesting an ex-junkie's cynicism and paranoia, sees as just another scam. The conflicts in Tom's world are personified by his two love interests. Acid-dealing Robin is as free (or as flighty) as her name implies, while Arlene Cooper, hooked on therapy, is as uptight as her name signifies.

Norman Spinrad is the author of over twenty novels, including BUG JACK BARRON, THE IRON DREAM, CHILD OF FORTUNE, PICTURES AT 11, GREENHOUSE SUMMER, and THE DRUID KING.
He has also published something like 60 short stories collected in half a dozen volumes. The novels and stories have been published in about 15 languages.
His most recent novel length publication is HE WALKED AMONG US, published in April 2010 by Tor.
He's written teleplays, including the classic Star Trek, “The Doomsday Machine,” and two produced feature films DRUIDS and LA SIRENE ROUGE. He is a long time literary critic, sometime film critic, perpetual political analyst, and sometime songwriter.
He's also briefly been a radio phone show host, has appeared as a vocal artist on three albums, and occassionally performs live. He’s been a literary agent, and President of the Science Fiction Writers of America and World SF. He’s posted 21 YouTube videos to date.
He grew up in New York, has lived in Los Angeles, San Francisco, London, and Paris, and travelled widely in Europe and rather less so in Latin America, Asia, and Oceania.

Reviews of The Children of Hamelin by Norman Spinrad

You have subscribed to alerts for Norman Spinrad.

You have been added to Norman Spinrad's favorite list.

You can also sign-up to receive email notifications whenever Norman Spinrad releases a new book.