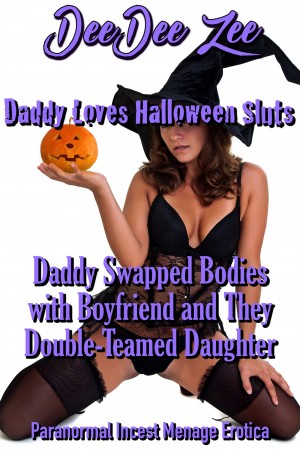 DeeDee Zee is a Romance author who has decided to slum it in Smut for a while. And really the naughty side of the tracks is the place to be. She’s all about hardcore cream-filled taboo shorts that are sure to get you hot and bothered and wanting more.

Get freebies from DeeDee on her site:
https://ddz.iluvsmutbux.xyz/freebies/

- Daddy Possessed His Daughter and Made Her Come (Daddy Loves Halloween Sluts)
https://www.smashwords.com/books/view/676925

- Waking Up to Futanari Twincest (I’m a Dick Girl!) (Fucked by a Halloween Curse)
https://www.smashwords.com/books/view/750230

- Sister is a Dick-Hungry Selfie Slut (Fucked by a Halloween Curse)
https://www.smashwords.com/books/view/751542

Daddy and boyfriend were a great team after the strange amulet switched their bodies. They learned how to switch back but let daddy's hot daughter enjoy them both pleasure her beyond her dreams.

This was a great taboo for Halloween .Daddy and switch places in their bodies to have sex with the daughter in order to switch back to themselves.They decided to keep to game on to get more sex. Good story.

What an amazing switch up of the classic three-way. Only this time involving a body switch between daddy and boy friend. .... and there's only one naughty, forbidden way to switch back. It's Halloween season and both Daddy and the boy friend all of darling daughter's holes. Great tale!

Daddy gets more than he bargained for when he gets into his daughter’s business by looking at a package she purchased! But her boyfriend, Dylan, steps in trying to help her, and they end up playing tug-of-war with an amulet. Next thing daddy knows is that he's looking into his own face....damnit he's trapped in his Dyan's body!

In order to swap bodies back, they have to have sex...skin-to-skin...satisfying sex! Hey, don't blame them...the directions said so! But there's no way daddy is getting stuffed by his daughter’s boyfriend! So Summer comes up with a solution...albeit a taboo one...they'll have a threesome...with her! Neither is pleased with her 'twisted' solution but neither wants to take a dick up their ass either so options are limited.

I really enjoyed this taboo tale as all 3 characters were a riot and shall I say 'talented' ...so it made for a hot and enjoyable read!!! Another great tale in DeeDee Zee's Paranormal series!

You have subscribed to alerts for DeeDee Zee.

You have been added to DeeDee Zee's favorite list.

You can also sign-up to receive email notifications whenever DeeDee Zee releases a new book.