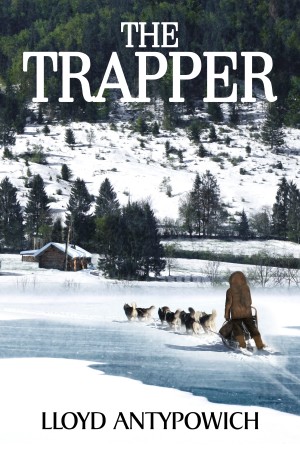 As time went by, events in his life proved his true character. Finding a native girl that was starving to death in a very crude shelter caused him to dig deep into his conscience to do the right thing. He did not have provisions for another person, but he couldn’t leave her to die. When his friend and pilot did not come back to pick him up in the spring, he had to decide what he was going to do. Nearly out of food, he had but one choice and that was to walk out. But he had not just himself to think about, but also the young girl that he learned to care for in a very special way. Was it love? He believed it was. Would she be able to make it out all the way? He had saved her life once could he do it again. He really didn’t have a choice. It was only by the skin of their teeth that they survived that long tiresome journey. They were nearly killed by a grizzly attack, and then fatigue and starvation almost done them in.

Not to give away any exciting moments, you will read of how Bert and another pilot flew over an area to look for a crash site that had been spotted. When they located it, the RCMP asked them to walk in and take pictures of the wreck to identify the plane. They were to bring any remains back with them to give closure to the wreckage and death of the pilot. Bert was nearly killed by a large grizzly on the trip. It was sheer determination that kept him going. Although he was quite seriously injured he completed the task that he was given.

As he ever so gently placed the remains found at the wreckage into the bag he said, “Randy, I would have much rather have liked to have gone fishing with you.”
Available ebook formats: epub mobi pdf lrf pdb txt html
First 20% Sample: epub mobi (Kindle) lrf more Online Reader
pdb
Price: $3.49 USD
Buy Add to Library Give as a Gift
How gifting works
Create Widget
Tags: trapping hunting adventure hunting canada
About Lloyd Antypowich

As a young boy Lloyd moved to the Slave Lake area with his family in the spring of 1948. His father was a logger and mill operator. This was mainly a family operation, hiring help only when it was really necessary. One could say it was operating on a labor of love; they loved each other and labored as hard as they possibly could, hoping that next year would be better.

For Lloyd it was a wonderful place to grow up. The lake was enticing; fishing, trapping and hunting were at the top of his priorities. But although his dad liked to show him how to do all these things, making enough money to pay for the saw mill was top priority, and every one had a job to do; lshovel sawdust, pile lumber, or roll logs to the sawyer. A lot of this was more than a kid should have had to do, but it never killed him. In fact, it made a mam out of him a lot earlier than was normal, but it was sure hard on the fishing and trapping. As the operation grew bigger and bigger, more men were required to keep the mill operating at a faster pace. His sister was designated book keeper, but as well she helped his mother cook. His two older brothers could do most anything around the mill, and his dad was the sawyer. That left a faller, someone to skid the logs and haul them into the mill, someone to pile lumber, someone to tail the saw, someone to run the edger, someone to tail the edger and someone to cant the logs for the sawyer. When the mill shut down at the end of the day, the family came out to deck logs, shovel sawdust, and service the mill to get it ready for the next day. When that was all done, everyone was ready for bed.

The operation grew quite quickly, soon power saws were taking over the Swede saw or crosscut saw, then a cat was added, then a truck, and a bigger power unit to run the mill. A trim saw, a green chain and a planer, all made things go faster and easier. Although they increased production, they still had to be paid for.

But life was easier, and it gave Lloyd a little more time to trap, which was something he loved to do. All along the Lake there were many mink ranchers and they had thousands of mink. Some would chew out of their pens and escape into the wild. Once out there, they were anyone’s when caught. Lloyd would trap them and sell them back to the mink rancher. But if it was in the summer time he didn’t get very much money for them. So, with his dads help, he built his own mink pens and would keep them till they were prime, and then he would pelt them and sell them to the fur buyer. Soon the word was out that he was catching quite a few mink. The game warden was also the Forest Range, who would stop in at the mill to check on various things.

“Are you sure that they are all his mink?”

“Well he thinks they are.”

He talked to Lloyd’s dad and told him that there were some complaints, and he thought that it would be better if he issued Lloyd a small trap line. Now he could trap any fur bearing animal in season.

When he was fourteen years old he bought his first guitar that he ordered out of the Eaton’s catalogue. One of the employees could play and sing all the old Wilf Carter songs and Lloyd just loved that. He helped him pick out the best guitar in the catalogue. It cost just under a hundred dollars, and in those days it was a lot of money.

Lloyd had a new dream he now was going to become a singing cowboy. But his dad put that idea on the rocks for him. Work was far more important than spending all his time learning all the latest tunes. And when Ken no longer worked at the mill he was on his own. As he grew older and stronger he was expected to do a man’s job.

School was his savior, but between trapping and learning to pay guitar some of his grades were slipping. So his guitar spent a lot of time under his dad’s bed till he got that straightened out. School never came easy for Lloyd, he had to work hard at it mainly because he had to do so much work to do, his homework never got done. Then there were sports, football and track and field that he loved with a passion and was good at it. But it all came into a conflict with work, so into his second year of high school he quit and became part of the regular crew.

They moved to High Prairie where his dad bought a bigger plaining mill. Like Slave Lake was so good to Lloyd for his trapping and fishing, High Prairie was a town that was good to him also. It had an abundance of girls and being a young man, he planned to serenade all them with his guitar. When the mill shut down after each shift he was not able to go out with the girls because he had to do the clean up around the mill. So they decided to come out and help him. Two jobs that were of utmost importance were that the area around the beehive burner had to be watered down to make sure that the sparks could not catch the shaving dust on fire. So he appointed three girls to do that job, the other three helped him clean up around the trim saw. He had told the girls to make sure they hosed down everything really well.

His dad was in the tool shed sharpening a resaw blade, having finished that he stepped out the back door to check on the burner and those girls turned the water hose on him. Well they soaked him down pretty good before he was able to get the hose away from them. Then it was his turn, and when he got done they looked like drowned rats. When Lloyd came to the burner to unload the trimming blocks these three girls were trying to dry their clothes on the scaffolding around the burner. That kind of wrecked the evening, so they decided to just sit around, he played his guitar and they sang all the songs they knew until the stars come out, then he gave them a ride back up town and bought them all a pie and coffee. They did that many more times, sometimes they would have a wiener roast, pop and chips to go with it.

As a young man the last thing in his mind was writing books. He was much too busy for that. But after he got all that fun stuff out of his life, he settled down and raised a family, and when he had enough of all the hard work, at seventy-two he retired. Then he took up writing books and reminiscing over the many trips he has made into the mountains, hunting and fishing.

Reviews of The Trapper by Lloyd Antypowich

You have subscribed to Smashwords Alerts new release notifications for Lloyd Antypowich.

You have been added to Lloyd Antypowich's favorite list.

You can also sign-up to receive email notifications whenever Lloyd Antypowich releases a new book.