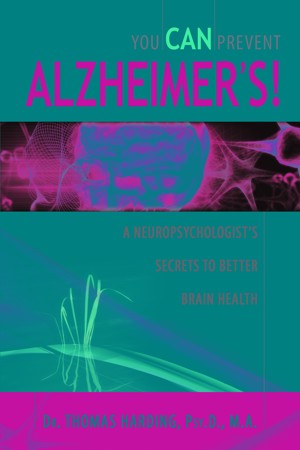 You CAN Prevent Alzheimer's!: A Neuropsychologist's Secrets to Better Brain Health

By Dr. Thomas Harding, Psy.D., M.A.
The road to dementia starts in middle age.
The good news- the majority of these future dementia cases are due to factors that are entirely preventable!
You CAN Prevent Alzheimer's! provides the proper
road map that shows how to get off the road to dementia and back on the path to better brain health and joyful golden years. More
The battle against Alzheimer's starts early. "You Can Prevent Alzheimer's!: A Neuropsychologist's Secrets to Better Brain Health" is a guide to starting the fight against dementia in its many forms starting in
middle age.
Encouraging readers to keep their brain stimulated, links that can lead to dementia, keeping the memory strong with practice,
diet, and better health, and much more.
"You Can Prevent Alzheimer's!"
is a must for anyone who strongly values their mental health for decades
to come.
-James A Cox, Editor in Chief
The Midwest Book Review

So moved by witnessing firsthand the progress made by his patients, he analyzed over 20 years of data collected by his mentor in Hawaii and reported his positive findings in 2005.

A skilled neuropsychologist in both the geriatric and brain-injured populations, Dr. Harding has often provided court testimony for patients whose mental capacity for legal matters was brought into question.

Dr. Harding has made guest appearances on radio talk shows discussing dementia-related topics.
He is also a frequent speaker at conferences on topics including proper brain stimulation and other dementia prevention strategies, as well as educating attendees on various mental health issues pertaining to the geriatric population.

Being community minded, Dr. Harding has served as Vice Chair of the Hawaii State Traumatic Brain Injury Advisory Board, Department of Health.

While living in Maui, he was a member of the Maui Geriatric Board (Hui), helping his community identify service gaps in treatment provision for the elderly.

Now living in Honolulu on Oahu, Dr. Harding is a key participant in the development of the State's 'Dementia Task Force.'
The Hawaii Dementia Task Force- like many other dementia task forces across America- are charged with solving the looming problem- how to survive the economic, political, and social impact the aging baby boomers presents.

Dr. Tom is a staunch advocate for dementia prevention- hence his latest book, You CAN Prevent Alzheimer's!

Global eBook Award Winner!
Dan Poynter's Global eBook Awards is proud to announce the 2011 Winner in the Psychology/Mental Health category: You CAN Prevent Alzheimer's!: A Neuropsychologist's Secrets to Better Brain Health. The battle against Alzheimer's starts early. Dr. Harding provides a guide to starting the fight against dementia in its many forms starting in middle age. Congratulations to Dr. Thomas Harding.

You have subscribed to alerts for Dr. Thomas Harding, Psy.D., M.A..

Would you like to favorite Dr. Thomas Harding, Psy.D., M.A.?

You have been added to Dr. Thomas Harding, Psy.D., M.A.'s favorite list.