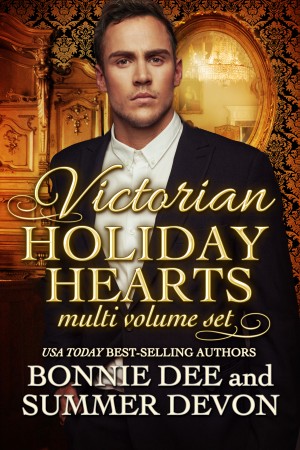 Simon and the Christmas Spirit: The holiday spirit has forsaken Simon Harris. A recent reminder of the man who used then left him sends lonely Simon on a glum visit to his club where a breath of fresh air in the form of Christopher Andrews enters his stale life. Simon and Christopher enjoy a few hours of pleasure, never expecting to see each other again, but Simon’s new resolution to change may transform both men's lives.

Will and the Valentine Saint: Will Andrews wants to escape the lunacy of his bohemian family and have an orderly life. Presenting false letters of recommendation for staid employment, the last thing he expects is to fall for his genteel employer, Hugh St. John. As the pair plans a Valentine charity dinner, they grow ever closer to surrendering to Cupid’s arrow. But when Will’s background is revealed, will Hugh forgive his lies?

Mike and the Spring Awakening: Young Micah Cordett’s privileged life explodes when he is caught naked with a schoolmate. Running away from disgrace, he blunders into a trap and endures months of abuse before escaping and joining the Andrews family. Just as he begins to climb out of his fear, a reminder of his happier past arrives in the form of Lucas Spring. Mike might never be ready to explore the possibility of love despite Lucas's gentle coaxing.

Delaney and the Autumn Masque: Delaney, a member of the Andrews theater clan, performs magic tricks at a fancy dress ball where he's struck by the dramatic figure of the Grim Reaper. He follows Death to a quiet room for a glorious, lustful encounter. With his identity hidden, impoverished gentleman Bartholomew Bancroft dares to indulge in an impulsive liaison, but can he find love with the magician when the masks come off?
Available ebook formats: epub
Price: $4.99 USD
Buy Add to Library Give as a Gift
How gifting works
Create Widget
Tags: mm gay romance victorian historical romance 1880s romance romance vaudeville
About Summer Devon

We are Bonnie Dee and Summer Devon and we write books together!

You have subscribed to alerts for Summer Devon.

You have been added to Summer Devon's favorite list.

You can also sign-up to receive email notifications whenever Summer Devon releases a new book.