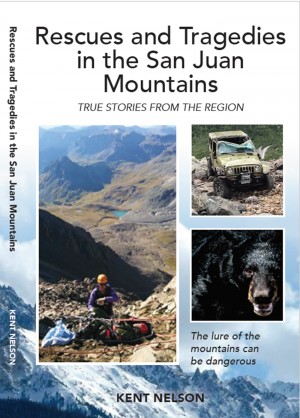 Rescues and Tragedies In the San Juan Mountains: True Stories from the Region.

More than 50 color photos of the events and the mountain settings illustrate the book, some of which can be seen on the book website http://www.mountainrescuestories.com and in a YouTube video. Also available on the website is a free download of one of the tales: “Ordeal on Mount Sneffels”. The 182-page book is available at the website and in San Juan Mountain area bookstores for $25.

This is the first non-fiction book for novelist and short story writer Kent Nelson. His work has won the Edward Abbey Prize for Ecofiction, the Colorado Book Award, the Mountains and Plains Booksellers Award and the Drue Heinz Literature Prize. As a bonus, two of Nelson’s previously published short stories set in Ouray are also included in the book.

Twain Publishers released another book about the region, Mines, Miners and Much More, in 2015. President Paul LeRoux has been an avid hiker in the U.S. and Europe for more than 40 years, and his experiences in the San Juan Mountains inspired both books. He contributed to photo research for the rescue book.
Available ebook formats: epub
Price: $9.99 USD
Buy Add to Library Give as a Gift
How gifting works
Create Widget
Tags: bear attacks mountain driving ice climbing mountain deaths skiing mishap avalanche deaths hunting tragedies jeep accidents mountain races mountain rescues
About Kent Nelson

Kent Nelson has lived in Ouray County, Colorado since 1974. He has done some unusual and interesting jobs over the years, including dishwasher, ad salesman, writer for a tow truck magazine and city judge.

Mountain Hiker and Runner
Kent has hiked all over the San Juan Mountains. He also has run the Imogene Pass Race three times and the Pikes Peak Marathon twice.

Writer
Kent’s published work includes four novels, six collections of short fiction, and 145 stories in magazines. His novels have won the Edward Abbey Prize for Ecofiction, the Colorado Book Award, and the Mountain and Plains Booksellers Award for best novel, and in 2014 his story collection, The Spirit Bird, won the Drue Heinz Literature Prize. In addition to being the writer of the rescue stories in this book, he is the subject of one of them.

Kent has held many distinguished professorships in fiction writing, including ones at the state universities of Alabama, Texas, Montana, Wyoming, Tennessee and Ohio. He has also taught at Colorado College and Rice, and at several summer writing conferences.

Birder
Kent has identified 766 species of birds in North America. He and his long-time partner, Judy Scheig, have also birded in Costa Rica, Ecuador, New Zealand, and Australia, and Kent, with the aid of gifts from his children, has traveled to Bhutan and to Attu Island, the last island in the Aleutian chain, in search of birds.

Reviews of Rescues and Tragedies In the San Juan Mountains: True Stories from the Region. by Kent Nelson

You have subscribed to alerts for Kent Nelson.

You have been added to Kent Nelson's favorite list.

You can also sign-up to receive email notifications whenever Kent Nelson releases a new book.