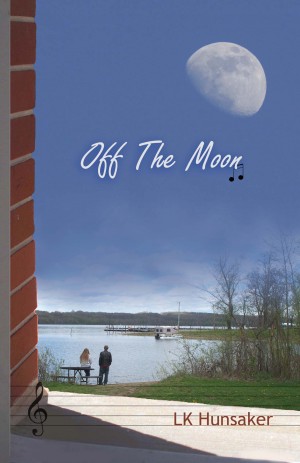 Rated 5.00/5 based on 1 reviews
"Riveting" Ryan Reynauld is immersed in a world of music, parties, and temporary companionship. At the top of the pop charts, his biggest concern is the way his music is produced, until he finds a young woman on a window ledge. Against advice from family and friends, and through media attacks and fan protests, Ryan determines to care for her himself, making a promise that may destroy his career.

Off The Moon
"Riveting" Ryan Reynauld is immersed in a world of music, parties, and temporary companionship. Having risen to the top of the pop charts, his biggest concern is objecting to the way his music is produced. That is, until he finds a young woman standing on a window ledge. Against advice, Ryan determines to care for her himself, making a promise that threatens to destroy his career.

Fans of LK Hunsaker will not be disappointed with "Off the Moon". The story follows Ryan Reynauld, a music star, as he tries to manage his music and his career after finding a deeply emotionaly troubled young woman. Her vulnerability and total trust in him lead him to make promises and take on responsibilities for her that even he recognizes are probably risky for them both considering his hectic rock star lifestyle. The alternative, turning her over to better equipped authorities, that she is literally deathly afraid of, is not path he is will to take her down. As a result his life, and the path of his career will be altered to accommodate this young girl and her mysterious past, despite opposition from those close to him.

Although this book would be fully enjoyable to someone who has never read anything else by Ms Hunsaker, I enjoyed the small references to her "Rehearsal" series that also takes place in the music industry, although many years earlier. While none of those characters play main parts in "Off the Moon" some showed up for small cameos that I was happy I recognized.

Hunsaker's main characters are generally honorable and good people. Despite this, I liked that they still make mistakes, sometimes even serious ones. It crates a much more realistic story than if it were only about good people fighting against the evils of the outside world. We can try our best, have good intentions, and still goof up sometimes. It's what we do afterward that can really define us. That was my take away from this story. I don't want to give away more than that. Very enjoyable.