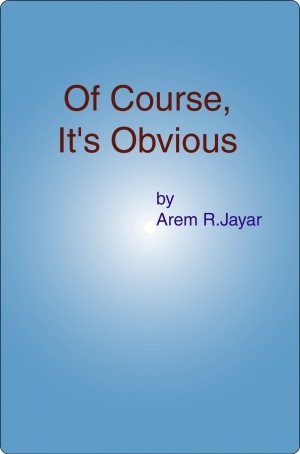 Of Course, It's Obvious

Arem R. Jayar is the nom de plum of a person who would use their real name if they enjoyed “the publicity thing.” Arem “has to” rather than enjoys writing. Arem also has a job, enjoys it enough to want to keep it and doubts that constant time off for marketing would be appreciated by co workers and management. He also thinks that "the message is more important than the messenger" and that, unlikely as it may be, celebrity would detract from any good that the book could do.
Arem says that he writes this stuff just to keep his feet on that ground that is at the intersection of idealism, reality and cynicism. Arem hopes that this book puts some reality into the idealism and vice versa.
Arem DOES hope and intend that this little book makes an acceptable and useful difference in the lives of the people that read it.

Reviews of Of Course, It's Obvious by Arem R Jayar

You have subscribed to Smashwords Alerts new release notifications for Arem R Jayar.

You have been added to Arem R Jayar's favorite list.

You can also sign-up to receive email notifications whenever Arem R Jayar releases a new book.