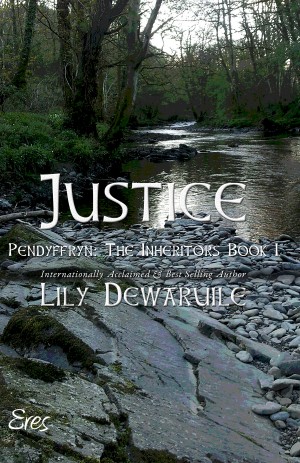 Justice: Book I, Pendyffryn: The Inheritors

To prepare his daughter, Tanglwys, for a future without his protection, Meinor Hedydd contracts with Gwennan Pendyffryn to take her as an apprentice in the Conqueror's Gaer household to learn skills that will be of use to others and a source of income for her. The presence of another dependent fostered child affects Gwennan's stepson, Marshal deFreveille, in a way that is not entirely unwelcome as he begins his own training to become a soldier in his father's army.

From the beginning of their acquaintance, Tanglwys and Marshal face hatred and intolerance. A fateful encounter at the river sparks more than his protective inclination toward her but, when Marshal punishes her brother and his friends for tormenting Tanglwys, their budding friendship falters.

A stranger still, and hated for his valor and skill, Marshal faces the first of his most difficult challenges when he falls in love with his sworn enemy's sister.

Her brother's resentment and loathing for the Conqueror's son are fierce. His violence toward Tanglwys for causing the incident at the river leads to his demotion to the lowest ranks of soldiery. In fear of her brother and to appease her mother's hatred, Tanglwys denies her growing admiration for the Conqueror's son until their false allegations threaten to destroy him.
Available ebook formats: epub
Price: $3.95 USD
Buy Add to Library Give as a Gift
How gifting works
Create Widget
Tags: family saga warrior wales celtic celtic britain celtic warrior family saga history justice and revenge romance 9thc
About Lily Dewaruile

Lily is a best-selling author and American writer of medieval Welsh fiction, and lived in Cymru(Wales) for 30 years. She is a member of Romance Writers of America, Hearts Through History Romance Writers and Celtic Hearts Romance Writers. She has written six novels set in 9th-10th Century Cymru(Wales): Traitor's Daughter, and the five novels in the Pendyffryn: The Conquerors series: Invasion, Salvation, Betrayal, Revival and Reconciliation.

Lily's Pendyffryn: The Inheritors continues with stories of Ieuan Emyr's and Christophe Maides's sons and daughters to be released, beginning in 2014.

The sequel to Traitor's Daughter, Vengeance's Son, is planned for the Fall of 2014.